‘Cannot get Shanaka out like that’: Rohit on withdrawing ‘Mankad’ appeal 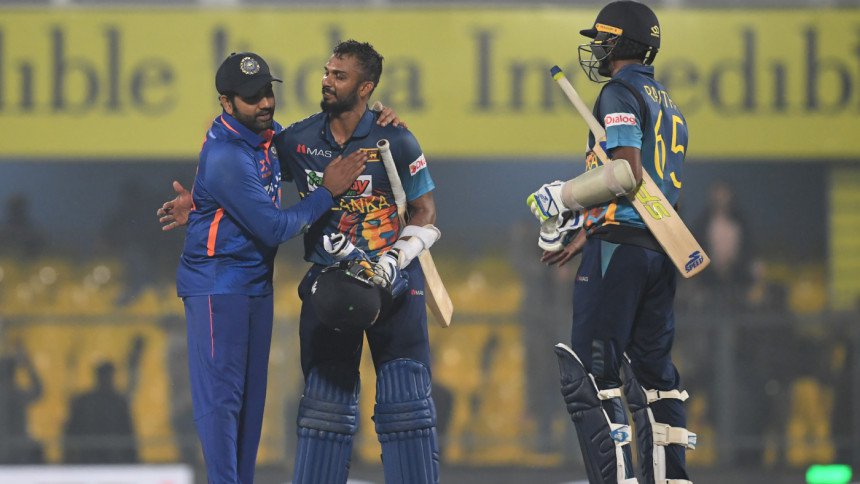 DOT Desk: India captain Rohit Sharma said he withdrew a ‘Mankad’ run-out appeal against Dasun Shanaka in yesterday’s one-day international as that was not how they envisioned dismissing the Sri Lankan skipper, who scored a century in a game his team could not win, reports The Daily Star.
With Sri Lanka requiring 83 runs off the last three balls in the second innings, India’s Mohammed Shami ran into bowl but whipped the bails at the non-striker’s end as Shanaka – who was then on 98 – left his crease.
Shami appealed for a run-out as the umpire signalled for a TV review before Rohit stepped in and withdrew the appeal after a chat with the umpire.
“I had no idea Shami did that and then went for an appeal,” Rohit said in a post-match interview. “Again, he is batting on 98.
The way he batted was brilliant, we’ve got to give it to him. We cannot get him out like that.
“We wanted to get him out the way we thought we would get him out, but that was not something that we thought of. But again, hats off to him, he played really well.”
The ‘Mankad’ dismissal, named after former India all-rounder Vinoo Mankad, is legal but has fuelled debate as to whether it breaches the spirit of the game.
Shanaka eventually brought up his century on the penultimate delivery of the innings before wrapping things up with a six to finish with an unbeaten 108.