Zero-waste food and grocery bus hopes to drive hunger away 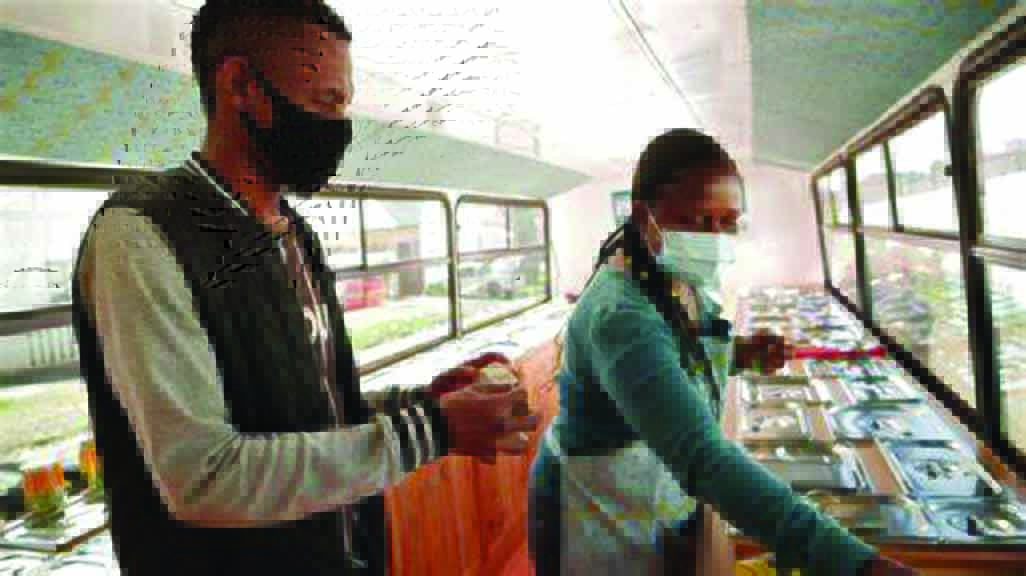 When Sidney Beukes got his bus driver’s licence, he never imagined himself behind the wheel of a 40-year-old school bus that has been turned into a mobile grocery store serving low-income residents of Johannesburg. The bus is not an easy drive: there is no power steering and it chugs along. But Beukes said every time a customer climbs aboard to buy groceries they could not afford in the shops, he is reminded of why he would not want to drive anything else. “We’re here for them, when people are stuck without food and it’s been a tough month … it makes me happy to see them happy,” said Beukes, 24, standing next to the gleaming white bus in the South African city’s working-class Bertrams area.
The Skhaftin bus – named after a local slang word meaning lunchbox – was born at the start of the coronavirus pandemic, when activist Ilka Stein appealed on social media for social entrepreneurs to brainstorm ideas to help the community.
Last year’s strict lockdown, which began in March, had a devastating impact on millions of South Africans. By April 2020, 3 million people had lost their jobs and one in five were going hungry, found a survey by universities. In the fourth quarter of last year, government statistics showed record unemployment of 32.5%, meaning 7.2 million people were out of work.”I knew I wanted to look at sustainable solutions around food,” said Stein, from her offices in Victoria Yards, a former laundry factory in inner city Johannesburg that now houses art studios, community vegetable gardens and a clinic.
The bus’s seats were removed to make way for cupboards and shelves to stack the fresh vegetables, beans, spices and cereals. By January this year, 90 days after Stein had bought the old bus, it was reborn as a mobile grocery store.
Three days a week, the bus parks in different city neighbourhoods where the team tells customers what the project aims to achieve, encouraging shoppers to bring their own containers to reduce plastic aste.
“I have moments where I look at this old school bus born out of a crazy idea and think: how did we manage to pull this off?” she said
‘MAKING CHANGE’
Twelve people responded to Stein’s social media call in June last year, and joined her in a brainstorming session that would last nine months.
“We felt like we were part of making change in our community,” said Sanele Msibi, 34, who answered Stein’s post after losing her job in a creche during lockdown and ended up becoming the bus coordinator.
Hunger is a pressing problem in the inner city where many families are made up of unemployed migrant workers and refugees crammed together in rooms and living hand-to-mouth. Pollution is another challenge, with residents complaining about inadequate waste disposal and collection that can lead to mounds of trash collecting on streets and in parks. In the wealthier northern suburbs of Johannesburg, shops like The Unwrapped Co. are pioneering zero-waste consumerism, encouraging shoppers to reuse glass jars and containers then buying food in bulk.
Stein took her brainstorming team to the shop during lockdown, and they discussed why the concept did not exist in low-income areas.
They realised that getting affordable, healthy food to people was the first priority, and that the conversation around reducing waste would follow this transaction. “People keep coming into the bus and asking: Who came up with this? It was an idea the community really needed,” said Msibi, after showing a customer the foods on offer./Reuters

‘WHEREVER IT IS NEEDED’

Desiree Ngcukana said she goes to the Skhaftin every week because it is “fresh, clean and affordable”.

The second-hand clothes seller said it helped her save money because she did not have to travel to a shopping mall to stock up on groceries.

“If you have 50 rand here, it goes much further than in the shops, I’m not going to bed hungry,” she said.

Msibi’s sister Thuli popped into the bus to buy some cereal.

But some people are still reluctant to board the bus, saying they think it “looks too nice for them”, Stein said.

“This broke my heart,” said Stein, who hopes with time the community realises the bus is open to everyone, even if they only have a few rand in their pocket.

For now, Stein is funding the Skhaftin through her consultancy company, but hopes it becomes self-supporting soon.

The city has applauded her efforts.

“The city of Johannesburg welcomes, encourages and supports any initiative that is meant to alleviate and mitigate against food insecurity,” said Nthatisi Modingoane, the city’s spokesman, in emailed comments.

Stein hopes others will copy her idea and take it to schools, townships and villages.

“I don’t want to build an empire. I want copycats to take this concept wherever it’s needed,” she said.