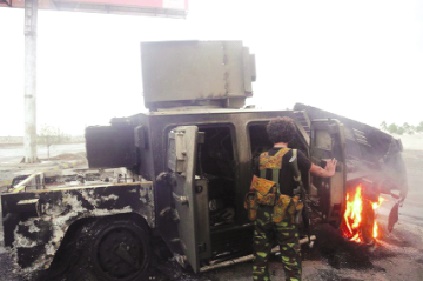 Arab News: The Saudi-led coalition in Yemen has resumed its offensive to liberate the vital Red Sea port of Hodeidah after proposed peace talks collapsed because Iranian-backed Houthi militias did not appear. At least 32 Houthis have been killed in renewed clashes, including four on Sunday in a coalition airstrike on a radio station tower.
Coalition-backed Yemeni forces last week seized the main road linking Hodeidah to the capital, Sanaa, as part of a strategy to isolate the two cities, both occupied by the Houthis. The UN’s Yemen envoy, Martin Griffiths, arrived in Sanaa on Sunday, but made no statement.
He is pushing for new peace talks after the failed attempt this month to bring the two sides together in Geneva.
Hodeidah is crucial to the conflict because the Houthis use the port to smuggle arms and other military supplies from Iran, including the components of missiles used to attack Saudi Arabia from launch sites in northern Yemen. The coalition has imposed a partial blockade on the port, which the Houthis seized in 2014.
Yemeni government forces launched a major operation in June to retake both the city and its port. The troops, backed by coalition airstrikes, have retaken a number of towns across Hodeida province but have not yet breached the city.
The coalition announced a temporary cease-fire in Hodeida in July to give a chance to UN-brokered peace talks.