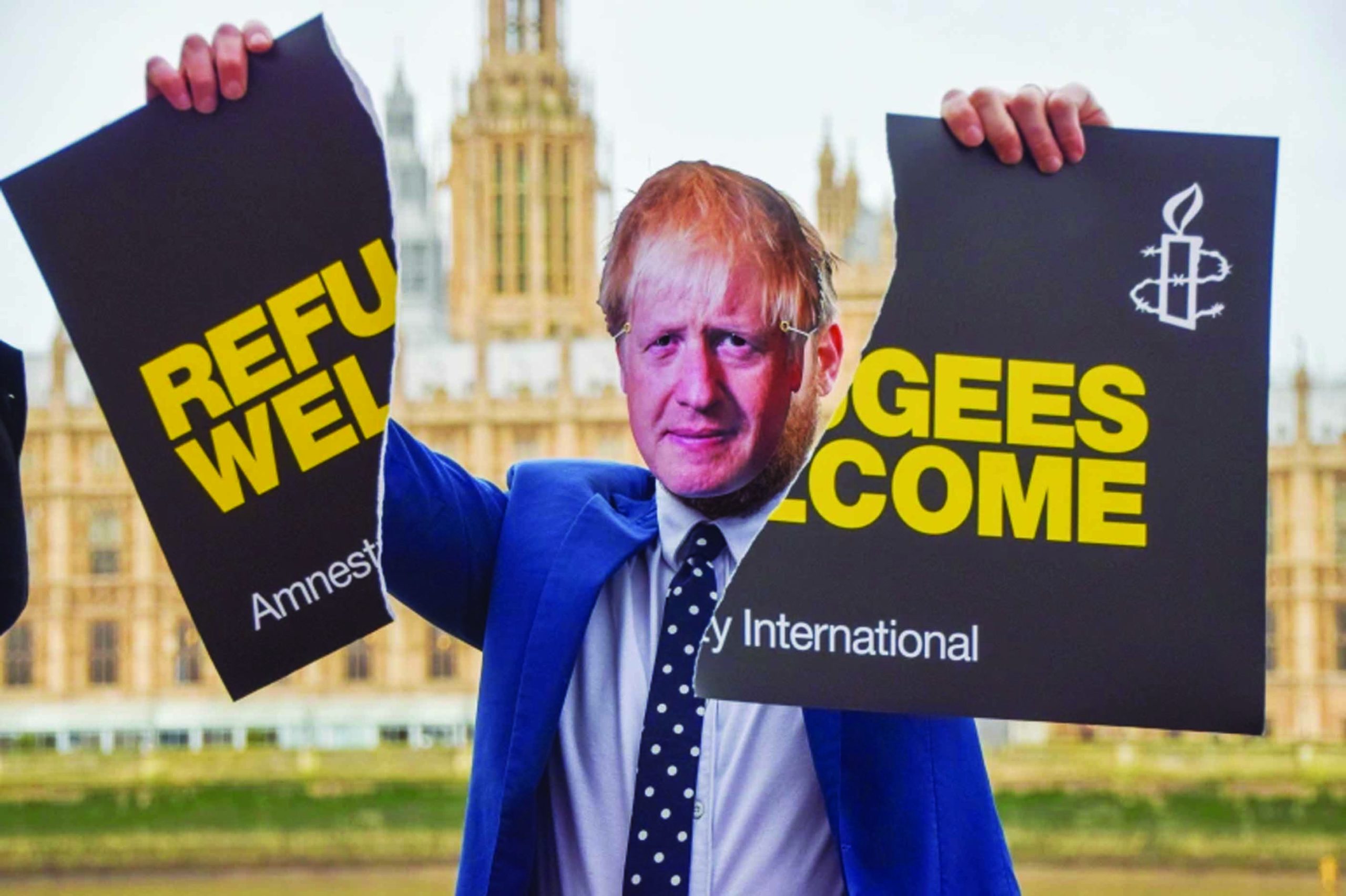 “It’s actually designed to isolate you, to bring you down, to make you want to give up, pack your bags and just go.” This is how Diana*, an asylum seeker, described the UK immigration system to me a few years ago. And she was right. In Britain, the system’s primary aim has long been to make people not want to stay. Many die trying to get to these isles. And those who make it face a complex, abusive bureaucratic nightmare that leaves them hopeless and destitute.
Seemingly not content with this, the Conservative government now appears to be seeking out new horizons of cruelty. Earlier today, Prime Minister Boris Johnson, embroiled in yet another political scandal, announced plans to send certain asylum seekers – initially single men arriving in the United Kingdom in boats and lorries only – some 6,500km (4,000 miles) away to Rwanda for “processing”. This is nothing short of state violence. Offshore processing centres – like those that have long been used by Australia – are notorious for extreme violence and abuse. They further traumatise vulnerable people who have risked their lives to cross borders. The offshoring plan was not concocted overnight. The government has been laying the ground for this cruel initiative for months if not years. With the help of some sections of the British press, the country’s leaders have been whipping up hysteria over people crossing the Channel in boats and pointing to harsher border controls and a more restrictive immigration system as the only solution to this so-called “invasion”. Of course, impenetrable borders and hostile immigration policies are not the solution, but the main reason behind the tragedies being witnessed at Britain’s shores. With so few safe routes into the UK, many are left with no choice other than attempting dangerous journeys in lorries and dingies – journeys that the government suggests make their asylum claims “illegitimate”.
“Unworkable, unethical and extortionate” is how the UK’s main opposition party, Labour, have described the government’s offshore processing plans. The Liberal Democrats, for their part, said it would be “ineffective” and “inefficient”. All this sounds a little too restrained – too polite. What we are facing here is neither a bureaucratic failure nor an unfortunate miscalculation. The problem is not incompetence but intentional cruelty. The UK government is, like many others across the world, deliberate in its xenophobia. This is just another policy aimed at gaining political capital from xenophobia – the government’s framing of the initiative tells us this much.
There is a reason why they say they will initially only take male asylum seekers to Rwanda. For years, the Tories have been feeding people the racist – and often Islamophobic – idea that Black and brown men who come to the UK to claim asylum are “liars” and pose a specific threat to people already living there. When they use the deeply dehumanising term “illegal immigrant”, they do not want people to picture real human beings in need of protection and compassion, but menacing others.
Asking the difficult questions : The Johnson government’s plan to send asylum seekers to Rwanda is not an anomaly but merely the latest in a string of blatantly xenophobic, cruel and inhumane immigration policies introduced by UK governments in recent years. So how did we get here?
For politicians, this is an uncomfortable question to try and answer. For decades, people from across the political spectrum have been flaming the public’s racist prejudices against asylum seekers for political gain. Indeed, the Labour Party had also assumed an intense anti-asylum rhetoric during its last stint in power and passed laws that can only be described as cruel. I am not mentioning this to obscure the leading role the Conservative Party played in making the UK’s immigration and asylum policy what it is today – nor the devastating impact these current plans could have. I am underlining the role Labour also played in constructing this xenophobic and cruel system because we cannot instigate real change without addressing the root causes of the problem.
Thanks to the efforts of past governments, both Labour and Tory, xenophobic exclusion has become a British tradition. It is against the backdrop of anti-immigration politics that the Johnson government thought it acceptable to suggest this new asylum plan.
As Prime Minister Johnson himself accepted, this initiative will be subject to challenge in the courts and from a “formidable army” of lawyers and activists. But fighting this plan in the courts will not be enough to change the cruel and xenophobic trajectory the UK is currently on. To make sure no government ever finds it politically beneficial to make such a proposal in the future, we should focus on changing people’s perceptions of people who move – regardless of why they do it, or what their status is.