Qawmi Madrasah degree gets Masters status Will it change the lives of students? 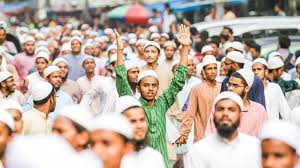 H. M. Nazrul Islam ,Contributing Editor, The New York Times, Bangladesh National Section :
UNB reported today (20th September) that a bill to recognise Dawrae Hadith (Takmil) certificate in Qawmi Madrasah with the status of postgraduate degree of Islamic Studies and Arabic was passed in Parliament on Wednesday. Education Minister Nurul Islam Nahid placed the Bill titled ‘Making Dawrae Hadith (Takmil) Certificate in Qawmi Madrasah Equivalent to Master’s Degree (Islamic Studies and Arabic)’ and it was passed by voice vote.
Earlier on April 13, 2017 the Government published a gazette notification recognising Dawrae Hadith (Takmil) to masters degree. This raised a lot of hue and cry among the citizenry; particularly a section of academics and civil society expressed their concerns about the consequence of such a recognition without knowing clearly what the students of Qawmi Madrasah study at that level.
In response to a query from the Daily Our Time, Professor Robaet Ferdous from the Department of Mass Communication and Journalism of Dhaka University pointed out that this was an issue of education, which had been made a political decision without properly reviewing the compatibility of its curriculum with that of the general education ones. He continued saying that a series of discussions should have been held with academicians from both side to see if any changes in the existing curriculum of Dawrae Hadith needed to be done before passing the law.
In a reaction Professor Shafiul Alam from the Department of Television, Film and Photography of Dhaka University said, “the number of students in Qawmi Madrasha is big and they should not be ignored; this huge community should be brought into mainstream and this initiative by the current government will do that”. He further said, “One area of concern is the syllabus/curriculum of Dawrae Hadith, which may require to be modernized to cope with the demand of our time, as all education should be aimed at creating job opportunity for the individual and should be directed towards the welfare of the society and the state”.
Both academicians expressed their concern about the compatibility and usefulness of the curriculum of Dawrae Hadith degree, if we plan on creating new workforce based on such education.
According to a report published on May 15, 2017 in Dhaka Tribune the main feature of the curriculum of Dawrae Hadith is as follows:
Features of the curriculum
Hudu’d Law: Several Mohadiss (Dawra-e-Hadith scholars) said Hudu’d Law is basically Islamic jurisprudence. ‘Muwattaʼ Imam Malik’ is the main book of law in the Dawra syllabus. Islamic penal laws such as severing of the arm as punishment for stealing, stoning to death as punishment for illicit sexual intercourse, are among those laws studied in these texts.

Jihad: The Arabic word “jihad,” which means struggle or striving, is understood in Islam – as described by the Quran and teachings of the Prophet Muhammad (SM) – as internal as well as external efforts to be a good Muslim, as well as working to inform people about the faith.

Veil (Hizab): A veil is an article of clothing or hanging garment that is intended to cover some part of the head or face, or an object of some significance. It is especially associated with women and sacred objects.

Women’s rights, systems and workplace: The Dawra syllabus has long chapters on women’s rights. Qawmi teachers said they teach about women’s rights, their workplace amenities, education facilities and all other necessities. Wali Ullah Arman, a senior Dawra-e-Hadith teacher at the Jamiya Arabiya Darul Ullum Madrasa told the Dhaka Tribune that under Islamic laws, women need to work within workplaces specifically created for female workers. “Also, as Islam says, women should go to their workplaces wearing Hizab and Nikab,” he said.

War (Kitabul Magajee): Kitabul Magajee is the book on Islamic warfare, which contains all war related Hadith that describe when Muslims can engage in war, what for, against whom and others issues on wars.

Business (Kitabul bayah): This book elaborates in which situation Islam allows buying and selling of goods. Islamic State Policy: Dawra students study Islamic state policy, county-to-country relationship and business policy, financial structure, and other issues related to the running of the state.
Islamic financial system: The curriculum sheds light on Hadith related to Islamic financial systems like savings, stock systems, banking systems and all other business and their explanations. A key tenet of this is the prohibition of riba, or interest. The term literally means “an excess” and is interpreted as “any unjustifiable increase of capital whether in loans or sales.”

Medical treatment: A Muhaddis said Dawra students study treatments for 3,000 different ailments. Of these, 1,000 have various herbal remedies and the rest have specific du’a or prayer for their cure. One of the Hadith that points to the importance of medicine in Islamic studies says: “For every disease there is a medicine, and if that medicine is applied to the disease, he will recover by Allah’s Leave.”

Policy on non-Muslims: The study of Islamic jurisprudence contains rules on how to treat non-Muslim communities, people and cultures. Non-Muslims are essentially allowed to stay in any Muslim state, but they have to pay a specific amount of tax to do so.

It is obvious from the above features of curriculum of Dawrae Hadith that it’s curriculum has no or a very little compatibility with the curriculum of general education in Bangladesh. Now with the enhanced status of masters degree Darwae Hadith will draw more students that will enter into the job market with very limited skills required for most of the job that currently the country can offer both in public and private sectors.
Even though bill has been passed to give Darwae Hadith (Takmil) the status of masters degree (Islamic Studies and Arabic), this is a high time for the policy makers and board members of Darwae Hadith to think about modernizing the syllabus/curriculum keeping the reality in account. Otherwise, the lives of tens of thousands of students studying Dawrae Hadith will not change.