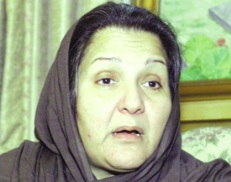 Reuters: The cancer-stricken wife of Pakistan’s former prime minister Nawaz Sharif died in London on  Tuesday while her husband and daughter were in jail, officials said. Kulsoom Nawaz Sharif, 68, died after months in a coma. She was diagnosed with lymphoma last year, barely a month after Nawaz Sharif was removed from office by the Pakistan Supreme Court after being ordered to face trial in an anti-corruption court.
“The wife of Mian Nawaz Sharif is no more among us. May God rest her in peace,” Shehbaz Sharif, the former prime minister’s brother, said on Twitter. New Prime Minister Imran Khan issued a statement offering condolences and ordering the Pakistani High Commission in London to “provide the family all the necessary facilities and cooperation”.
Nawaz Sharif was in London with Kulsoom earlier this year when the anti-corruption court handed him a 10-year jail term and sentenced his presumed political heir, daughter Maryam, to seven years in prison over the purchase of luxury flats in London in the 1990s.
The father and daughter left her bedside to return to Pakistan to rally their followers ahead of July 25 elections, which their party lost to the former cricket star Imran Khan’s party. Both were arrested on arrival and have been imprisoned since.
Kulsoom Sharif was briefly a member of parliament after she won her husband’s former seat in a by-election after the Supreme Court disqualified him.
Three-time-premier Nawaz Sharif, who was removed from office in each of his elected terms, has maintained that his ouster in July 2017 and subsequent conviction were part of a plot against him by the powerful military and the judiciary.
The army has repeatedly denied any interference in politics, while the courts insist justice is carried out impartially.