While all eyes are on Syria’s Idlib, US continues to decimate Yemen 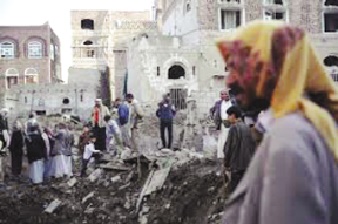 Russia Today: The US is ready to defend Syria from a brutish assault launched by Syria’s own government and its allies – or so Washington wants you to believe. In the backdrop, Yemen continues to burn in silence.
On September 3, US ambassador to the UN, Nikki Haley – eloquent diplomat that she is – retweeted a tweet from the warmonger in chief that is the US president, with the caption “All eyes on the actions of Assad, Russia and Iran in Idlib.” This is the same US administration who just facilitated the bombing of a school bus in Yemen, slaughtering at least 40 children in the process.
Maybe, just maybe, Nikki Haley should keep her eyes on herself.
If the world did direct its eyes to what is taking place in Yemen, they would know that the United Nations has just warned of an “incalculable human cost” in the works, as the US and its allies press forward with an offensive to retake the Yemeni port city of Hodeida from the Houthi rebels. That’s right. The US, currently waving its arms in despair about human rights abuses and chemical weapons attacks that have not even taken place in Syria yet, is supporting a major offensive of its own that will lead to a humanitarian crisis of monumental proportions.
Yemen, a country already deeply in crisis, relies on the port of Hodeida for at least 70 percent of its humanitarian aid. It therefore makes sense from a humanitarian perspective to turn its location into a major war zone, am I right?
The small minority of people who are inclined to care about innocent Yemenis need not fret though. US Secretary of State Mike Pompeo has just this week certified that the Saudi-led coalition is taking sufficient steps to protect civilians. According to Pompeo, the Gulf nations involved are “undertaking demonstrable actions to reduce the risk of harm to civilians.”
“They are taking steps, in the view of the US government and this administration, in the right direction,” State Department spokeswoman Heather Nauert told a briefing, according to Reuters. “We see them taking steps. Is it perfect? No absolutely not. Do we see them doing what they can to mitigate civilian casualties? Absolutely we do.”
Thank God – I was getting worried there for a second. The US-backed Saudi-led coalition may be killing children as if they were ants, but they are taking steps to mitigate the number of children they are killing at the same time.
A seven-page memo sent to Congress and obtained by the Intercept further confirmed Pompeo’s delusional thinking, as the memo called Saudi Arabia and the UAE “strong counterterrorism partners.” Never mind that just last month, the Associated Press reported the US and its allies were actually recruiting Al-Qaeda fighters to join the coalition.
While the Trump administration is taking a horrifying and bloody war and taking it to new depths, the truth of the matter is that this war did not begin under Donald Trump. The war in Yemen, the Arab world’s poorest nation, fast becoming the world’s worst humanitarian crisis, was started by none other than peace-prize laureate Barack Obama himself.