What to do with a Met police that harbours rapists and murderers? Scrap it and start again 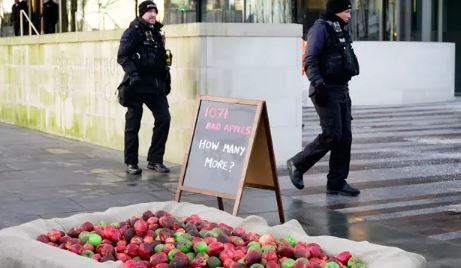 Jonathan Freedland/The Guardian: The whole barrel is rotten. Perhaps it began with a few bad apples long ago, and of course some good ones will remain even now, but the rot in the Metropolitan force has spread.
You read of David Carrick, the officer who kept his uniform, his badge and, for many years, his gun even as he pursued a parallel career as a prolific sex offender, and of course you are sickened by the evil he has done: dozens of rapes and sexual offences against 12 women, over two decades, including imprisoning one of his victims, naked and terrified, in a tiny cupboard under the stairs. But an equal horror comes when you learn that the police had been warned eight times about Carrick’s behaviour – eight – but did nothing. In fairness, that’s not quite right; they did do something. They promoted him in 2009 to an elite armed unit.
The horror is familiar. We felt it when another serving Met officer, Wayne Couzens, raped and murdered Sarah Everard in 2021. We felt it when, that same year, Met officers were jailed for circulating photographs of the bodies of two murdered sisters – “dead birds”, they called them – for the titillation of their colleagues. And we felt it a year ago when we learned of the group at Charing Cross police station in London who traded WhatsApp messages casually joking about rape and speaking of women in terms so filled with hate the word “misogyny” scarcely does it justice.
The pattern is so clear that the individual perpetrators are best understood as symptoms of a larger sickness. The Metropolitan police is a diseased institution. The new commissioner, Mark Rowley, is said to be a decent, well-intentioned man, but few would rate his chances of healing the Met. Anyone who tries runs into a stubborn, suspicious workforce ready to feed hostile stories to a receptive press – which is how you end up with a commissioner like the last one, Cressida Dick, who seemed to regard her prime mission as keeping police officers happy, with serving the public a distant second. So what can be done? A generation ago, after the murder of Stephen Lawrence, it became impossible to deny that the police lacked the confidence of black Londoners. The result was the Macpherson inquiry. We are at a similar moment now: London’s women can no longer trust the police. How could they, when, should they have the courage to report a rape, they might be questioned by an officer who’s committed that very offence, or harbours the attitudes displayed in those Charing Cross messages? As a first step there needs to be a Macpherson-style investigation of misogyny in the Met.
The conclusion would surely be drastic. Recall that, in the same era as the Lawrence murder, it became similarly unarguable that half the population of Northern Ireland had no faith in the Royal Ulster Constabulary. The result was the dissolution of that force and its replacement with a new service. Keir Starmer, who played an advisory role in the establishment of the Police Service of Northern Ireland, was right to cite that precedent this week, because the Met has similarly lost the confidence of half the population it’s meant to serve: namely, women. The remedy should be the same for London as it was for Northern Ireland: scrap the Met and start again.
It’s an extreme solution, but the problem is extreme. The Metropolitan police fails the two tests that count. It cannot demonstrate efficiency – see last September’s damning report by the police inspectorate, finding that the Met is failing when it comes to investigating crime and protecting the vulnerable – and it has lost legitimacy. As in Northern Ireland, a new service needs to be born, under wholly new leadership, with a head experienced in criminal justice but untainted by Met culture. Joan Smith, the definitive authority on police misogyny and onetime adviser to the London mayor on violence against women, has an intriguing suggestion: she nominates the lawyer, former minister and former police and crime commissioner Vera Baird. Still, this is hardly a problem confined to London. A second inspectorate report in November looked at eight separate forces and concluded that “a culture of misogyny, sexism, predatory behaviour towards female police officers and staff and members of the public was prevalent in all the forces we inspected”. Literally every female police officer and staff member the inspectors spoke to told of harassment and, in some cases, assaults.
It won’t wash to say that the police reflect society and so will always include a proportionate number of abusers. These numbers are disproportionate. That suggests that the police are attracting more than their share of violent, abusive men. There’s no mystery about that. A job that gives you power over women and the vulnerable, including access to their personal information, is bound to lure men bent on doing harm. The answer is to tighten vetting, so that recruiters are looking out for those who want a police badge for all the wrong reasons.
But the grimmer truth is that this malady goes far beyond the police. There were 70,000 rapes recorded last year in England and Wales alone – 1,350 a week – and those are just the ones that were reported, estimated as a mere quarter or fifth of all the rapes that happen. Of those recorded, just 1.3% resulted in a suspect being charged. Obviously only a fraction of those ended in a conviction. When fewer than one in a hundred rapists ever face any consequences, it’s time for a society to be honest with itself – and admit that it has, in effect, decriminalised rape. Worse, says Smith, it is creating serial rapists: a man does it once, gets away with it, and realises he can do it again. And again.
There are remedies, starting with a system that investigates the suspect instead of the victim rather than the other way around.