What Happens When You Donate Your Body To Science 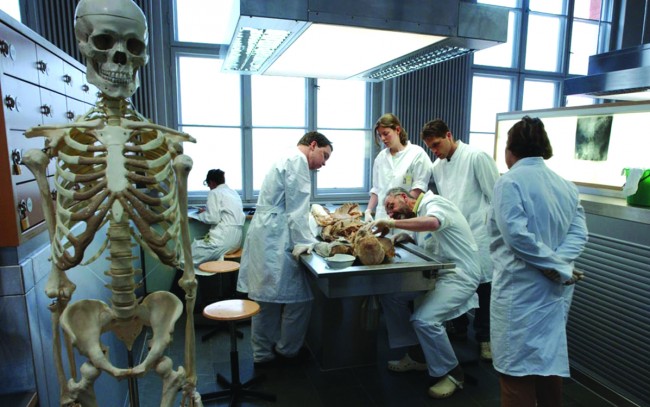 Maybe you were a sad little person who never had any friends and could not accomplish anything in their life. So you decided to donate your body to science in order to advance human knowledge. All in the hopes that maybe in death you could accomplish something good. However, you might want to think twice because this is what your corpse might be used for.

•David Carrier is a biology professor from the University of Utah who believes in the theory that our hands underwent a series of evolutions in order to punch better. Thus he assembled some mutilated arms in order to figure out how to make them deliver some mean punches. The researchers attached the arms to a pendulum and tied the tendons of the forearm muscles to a fishing line, which allowed them to be operated by guitar tuners. Carrier and his group subsequently forced the detached arms to whack a force-measuring dumbbell using the following hand positions- a clenched fist, a loose fist, and an open-palm slap. And guess what they figured out after? Apparently a clenched fist has the most impact. We totally did not know that now, did we? What a surprise!

•In the year1899, LaGarde and Colonel John T. Thompson (the ones who invented the Thompson submachine gun made famous by Al Capone and the like), hung a great number of corpses from the ceiling and took turns shooting them down with 38 mm and 45 mm bullets.
Dozens of rounds were fired at each corpse and they determined the effectiveness of the bullets solely based on how much they made the body swing. Their conclusions inspired military policies, specifically the ones that say that service pistols cannot be less than 45 mm in size. However, these experiments were later on condemned for being unethical and “scientifically unsound.” which led the experiment to becoming extinct. In case you are wondering, yes popular game series House of the Dead MIGHT have been inspired from this.

•There is absolutely no way that you will let an inexperienced surgeon get anywhere near your face right? Do not worry. Medical students rather practice on decapitated heads of corpses. Why creepy decapitated heads? Because the scientific community does not want to be wasteful and so they donate the rest of the body elsewhere. Maybe Zombies are corpses who decided to resurrect themselves so that they could seek revenge on plastic surgeons for their pals.

•Blinking is such an important thing but you don’t even think about it until you can’t do it anymore. Our doctors are now trying their best to develop artificial eyelid muscles which can be transplanted into those individuals whose eyelids no longer function due to a condition called facial paralysis.

•Ever wondered how researchers verify how safe you will be during a crash? Obviously crash test dummies, right? Well, guess what? Not even the most technologically advanced dummy can tell you all the information. Which is why, to get the best result with maximum info, you might have to smash a poor dead guy into a brick wall. That’s not all! Sometimes researchers even use actual human legs to examine which type of landscape will cause tears in ligaments of athletes.