What does ‘i’ in ‘i-Products’ stand for? 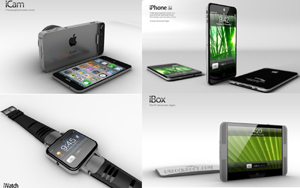 It’s perhaps one of the most awe letters in the world of IT products — but nobody’s entirely sure what it means. iNtutive, iMaginative, iNnovation, iNspiring, iNformative, iT etc.
The ‘i’ at the start of iPhone or before the name of any apple product is one of its defining features. Commonly guessed, it mostly refers to “internet”. Interestingly the story behind this ‘i” is slightly more complicated.
The naming convention was first introduced with the iMac. Launched in 1998, the computer marked the beginning of the modern Apple. It was launched just as the internet was catching on and was made central in the computer’s advertising.
While introducing the computer, Steve Jobs said “Even though this is a full-blooded Macintosh, we are targeting this for the number one use that consumers tell us they want a computer for, which is to get on the Internet — simple and fast,” he said at the time. “And that is what this product is targeted for.”
But that was far from the only meaning of the “i”, Mr Jobs said. During the launch, he showed a slide with a number of different headings: internet, individual, instruct, inform, inspire. “’i’ also means some other things to us,” he said. “We are a personal computer company, and although this product is born to network, it also is a beautiful stand-alone product. We are targeting it also for education. The computer is perfect for most of the things they do in instruction.”
The company would go on to brand almost all of its products with the little letter. Software such as iTools and hardware including the iPod all talk on the name. Even their latest watch product, should have been iWatch. Sadly, there was already a popular realtime filesystem monitoring program. So, Apple just bought Google ads for the term “iWatch”. Which made a trademark holder in Europe so angry that they are sued Apple over the name iWatch, though that was not the product’s given name.
After all, Apple seems to hold the belief that their products would eventually have a similar effect with an ‘i’ for Apple. As Apple found the place in the people’s heart with the iMac.