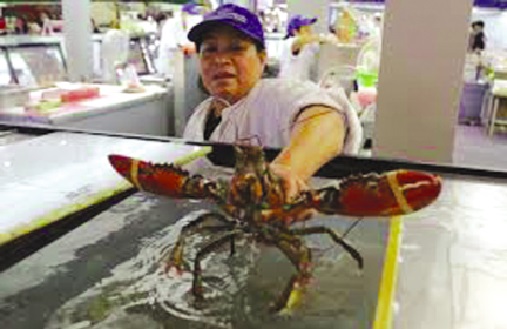 Reuters
The U.S.-China trade war has triggered a seafood supply chain shake-up, with U.S. importers scrambling to stockpile frozen Chinese squid and tilapia ahead of looming price increases while Canada exports more lobsters to China. A series of retaliatory tariffs between Beijing and Washington has led to a shift in global  trade, creating winners and losers in sales of commodities from soya to seafood to pork.
About $3 billion worth of Chinese seafood imported into the United States is now subject to a 10 percent tariff that began this week, with the levy rising to 25 percent on Jan. 1. In July, China imposed a 25 percent tariff on U.S. seafood, hitting lobster, a delicacy for the Asian country’s burgeoning middle class.
As a result, Chinese demand for lobster from Canada has increased, with airports in the country’s eastern provinces adding cargo flights to accommodate higher exports.