UP polling ends amid widespread irregularities 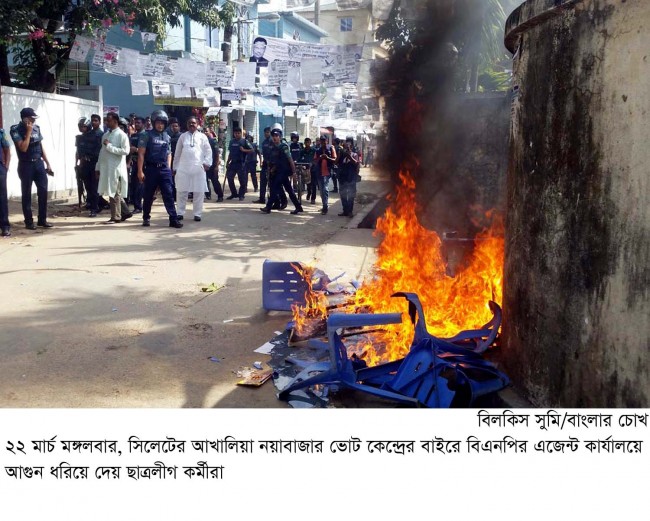 Desk Report
First stage of Union Parishad election has ended on Tuesday in 712 polling amid widespread irregularities, leaving two dead and 500 injured.
The balloting in the first phase of the UP election began at 8:00am and continued till 4:00pm without any break. Although 717 UPs were set to go to polls on Tuesday, the Election Commission postponed elections to five UPs of Bhola at the eleventh hour. As part of the first phase election, the voting in 11 other UPs will be held on Wednesday while two on Sunday. As per latest information available at the EC secretariat, voting in at least 40 polling stations was suspended across the country following violence and irregularities. According to reports reaching the UNB news desk, the voting was marked with violence and anomalies in Jhalakati, Noakhali, Laxmipur, Barisal, Bhola, Sirajgnaj, Bagerhat, Patuakhali and Satkhira districts.
In Comilla, Debidar upazila, a boy died amid the violence of the UP election. In Jhalakati, a sexagenarian man was killed and 10 people were injured in a clash between the supporters of two member candidates in Nabogram union of Sadar upazila.
Witnesses said the clash erupted around 1 pm when the supporters of Chunnu Shikdar obstructed the followers of Sajib Hossain when they tried to capture Kaliandar polling centre.
The both groups attacked each other, leaving Abul Kashem Shikdar, brother of Chunnu Shikdar, dead on the spot. In Noakhali, an assistant presiding officer and a polling officer suffered injuries as miscreants fired shots at a polling centre in Char King union of Hatiya upazila in the morning.
In Barisal, snatching of ballot boxes by ‘unidentified miscreants’ forced the authorities suspend voting at a centre in Korapur union of Barisal Sadar upazila in the morning.
Meanwhile, 15 people were injured in Rahamatpur union of Babuganj upazila in a clash between supporters of BNP-backed candidate and his AL-backed rival.
Besides, AL-backed chairman candidate Abdul Kader boycotted polls in Dharichar Khajuria union raising allegations of snatching ballots by the supporters of an AL rebel candidate in Mehendiganj upazila.