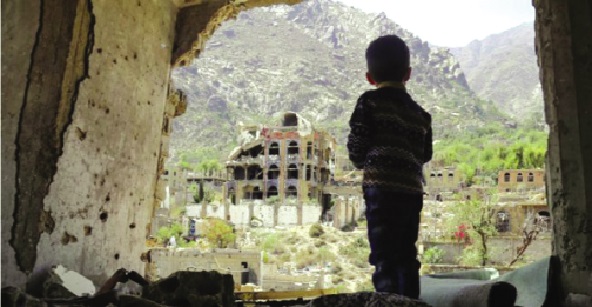 France24
UN nations voted 21 to 8, with 18 abstentions, in favour of a resolution that renewed the UN-backed investigation for a year.
Last month, investigators detailed evidence of possible war crimes committed in Yemen by both the Saudi-led coalition and the Houthi rebels supported by Iran.
In that report, the team of UN-mandated investigators said all parties in Yemen’s bloody conflict had committed a “substantial number of violations of international humanitarian law”. Many of these violations may amount to “war crimes”, the report said, citing widespread arbitrary detention, rape, torture and the recruitment of children as young as eight to take part in hostilities.
It said coalition air strikes had caused “most of the documented civilian casualties”, including strikes on residential areas, markets, funerals, weddings and medical facilities.
The report said there were “serious concerns about the targeting process applied by the coalition”, pointing out that in many cases there were no apparent military targets in the vicinity of the attacks.
Covering the period from September 2014 through June 2018, the report did not address a series of deadly strikes during the summer that killed dozens of children in rebel-held areas and sparked international outrage. The coalition and the Yemeni government, which together are battling the Houthis, strongly criticised the probe’s initial report, arguing that it underplayed rebel violations and Iran’s role.
The Arab group in the rights council had backed a rival text that called on Yemen’s national human rights commission to take charge of future investigations into the conflict.
That proposal was a non-starter for many states, given a widespread lack of confidence in the Yemeni commission.
The approved resolution, led by a group of European states and Canada, calls on investigators to deliver another report next September.
In what may have been a consolation to the Arab group, the council passed a second Yemen resolution calling for support for the national commission, but its impact is largely meaningless as the international probe continues its work.
Probe members said they needed more time for a full documentation of the range of violations in Yemen’s conflict, which has killed nearly 10,000 people since March 2015 and triggered what the UN has called the world’s worst humanitarian crisis.
Twenty-two million people in the country need aid, many of whom are at risk of famine.
Riyadh’s ambassador to the UN in Geneva, Abdulaziz Alwasil, said he voted no because the resolution did not address his “legitimate concerns”, notably about the “lack of balance” in the probe’s first report.
The fact that it went to a vote underscored divisions on the issue within the 47-member rights council, which typically strives for consensus.
Britain’s UN Ambassador Julian Braithwaite had said his government was particularly “disappointed” that consensus could not be reached with the Arab group, as happened when the probe was set up a year ago.
“It is clear that in many instances, alleged violations committed by all parties have not yet been fully documented, particularly those committed by the Houthis,” Braithwaite told the council.
Human Rights Watch (HRW) said the vote “sent a clear message that it stands with Yemeni civilians”.
“States at the UN Human Rights Council stood firm today, in the face of shameful efforts by the Saudi-led coalition to quash a UN expert inquiry,” HRW’s Geneva director, John Fisher, said in a statement.
Saudi Arabia intervened in Yemen in March 2015 when President Abd-Rabbu Mansour Hadi fled into exile as rebels closed in on his last stronghold.