Focus should be on trade to spur economic activities: Muhith UK happy over BD’s development 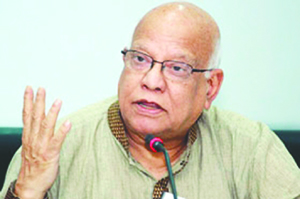 Finance Minister AMA Muhith has said trade must be given great importance to expedite economic activities of the countries around the world and implement the Sustainable Development Goals (SDGs).
The Finance Minister was attending a discussion titled ‘Financing the SDGs’ at the UN headquarters, New York on Wednesday as part of programmes marking the 50th anniversary of the UNDP, according to a PID handout issued here on Thursday. Ministers for Finance, Planning and Development from across the world participated in the programme. UNDP Administrator Helen Clark and executives of international and regional development organisations also attended the day-long programme. Muhith said Bangladesh has tremendously expedited domestic resource mobilszation and has been implementing giant infrastructure projects which would contribute to the implementation of SDGs. “Through the process, Bangladesh has come out of the ODA (official development assistance) dependency also.” The Finance Minister, however, disagreed with the announced estimated cost to US$ 3.5 trillion a year for the implementation of SDGs. He said it was not correct in the case of MDGs as more resources than the estimation was needed in the implementation of MDGs.