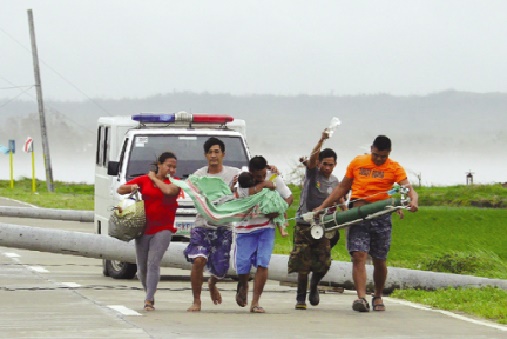 NY Times: Typhoon Mangkhut struck the Philippines early Saturday, after tens of thousands of people evacuated their homes to escape the 550-mile-wide storm as it roared across the Pacific. More than 12 hours after landfall, at least three deaths were reported, but there were no signs of the kind of devastation wreaked by Typhoon Haiyan five years ago.
Still, officials had barely begun to assess the damage. Some places could not be contacted because of communication outages, and several provinces had suffered complete power blackouts.
The ferocity of the storm — which arrived at 1:40 a.m. with maximum sustained winds of around 120 miles per hour — in some ways eclipsed Hurricane Florence on the other side of the world, which was pummeling the Mid-Atlantic Coast of the United States with life-threatening rains and flooding.
By 4 p.m., Mangkhut’s eye had crossed Luzon, the Philippines’ largest island, and was about 100 miles off its west coast, headed for Hong Kong and southern China, according to the Philippine weather service. The typhoon had weakened somewhat but still had gusts of up to 160 miles an hour, the agency said.
The authorities said more than 105,000 people had taken shelter in evacuation centers as the typhoon was nearing. Local news media reported that two rescue workers were killed in landslides in the Cordillera region. Other outlets reported that landslides killed two women in the mountain town of Baguio, citing Philippine national police, but it was not immediately clear if they were referring the same people.
The police also said the body of another victim, a young girl, was found in the Marikina River in the eastern part of metropolitan Manila, the capital.
Manila seemed to have been spared major damage, though trees were uprooted and areas were flooded. Strong winds and heavy rain battered northern and central Luzon as the eye of Typhoon Mangkhut slammed into the island, the largest and most populous in the Philippines, in the early morning hours of Saturday.
The eye made landfall over Baggao in Cagayan Province around 1:40 a.m., according to the country’s national weather service, and moved west across the country, hitting the opposite coast near Laoag City by 9 a.m.
The maximum sustained wind speed of the typhoon had slowed to around 120 miles per hour as it reached Luzon’s shores, according to the national weather service, but some gusts still reached up to 200 miles per hour.