Tropical Maldives heads to polls amid criticism over fairness of vote 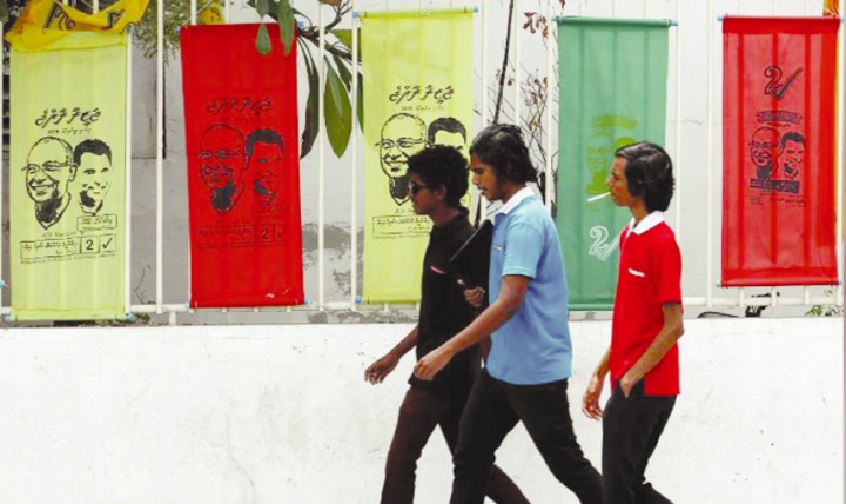 Reuters: More than a quarter of a million people will vote on Sunday for the next leader of the tropical Maldives in an election criticized internationally for a lack of transparency and suppression of government critics.
President Abdulla Yameen is seeking a second five-year term in the Indian Ocean archipelago, a popular high-end tourist destination and a key state in the battle for influence between India and China.
But the government has jailed many of his main rivals after speedy trials for charges ranging from terrorism to corruption, and introduced new vote-counting rules that observers say will prevent them from seeing individual ballot papers, leading to doubts about the legitimacy of the vote.
The main opposition Maldives Democratic Party (MDP) and local and international observers have also raised concerns over restrictions on foreign journalists wanting to cover the polls and the Election Commission’s refusal to share the final list of voters.
“Maldives authorities have detained critics, muzzled the media and misused the Election Commission to obstruct opposition candidates to ensure President Yameen a victory on election day,” said Patricia Gossman, Asia associate director at Human Rights Watch.
Transparency Maldives (TM), an independent election monitor, said on Tuesday that “unless these issues are resolved, it is very likely that the outcome of such an election will not be accepted by the people”.
Election Commission spokesman Ahmed Akram told Reuters the allegations “don’t have any basis in reality”.
“The counting process will not be different from the previous elections,” he said.
The Election Commission has previously said that foreign observers will be present, without naming who those will be.
Yameen, 59, dismissed allegations of abuse of power earlier this month during campaigning.
“If the accusations about authoritarianism are true, when I go to islands, the people will tell me ‘we are tolerating so much abuse’,” he said.
“I won’t see smiles on the faces. No one will come to greet me and shake my hand, if there is tyranny.”
The country has faced upheaval since February, when Yameen imposed a state of emergency to annul a Supreme Court ruling that quashed the convictions of nine opposition leaders, including former president Mohamed Nasheed, the country’s first democratically elected leader.
Since then, Yameen’s ruling coalition has enacted laws without a required quorum in parliament, approved by the Supreme Court after its chief justice was arrested in February for alleged corruption under emergency regulations.
MDP leader Nasheed, who in 2009 famously held a cabinet meeting underwater in scuba gear to highlight the dangers of global warming to the low-lying islands, is currently in exile in Sri Lanka and is barred from standing in Sunday’s poll.
Member of parliament Ibrahim Mohamed Solih (Ibu) is running against Yameen under an opposition coalition, promising democracy, a crackdown on corruption and better relations with the West after Yameen steered the country closer to China.
“What happens from today to the voting day remains uncertain,” the MDP’s spokesman, Hamid Abdul Ghafoor, who lives in exile, told Reuters.
Yameen’s administration made defamation a crime in 2016, a move government critics say was aimed at stifling dissent. It also suspended 56 lawyers from attending court last year for demanding to uphold the rule of law.
“The space for civil society has not shrunk. It does not exist any more,” Shahindha Ismail, the executive director at Maldives Democracy Network, told Reuters.
Yameen has disregarded calls from the United Nations, several western countries and India for an amicable solution to the lingering political crisis. In 2016, the Maldives quit the Commonwealth group of nations, which threatened to suspend the country after it criticized the government for rights abuses.