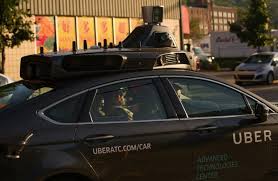 AFP: Toyota will pump about $500 million into ride-share firm Uber as part of a deal to work together on mass-producing self-driving vehicles, the Japanese car giant said on Tuesday.
The deal, which reportedly values Uber at about $72 billion, aims at “advancing and bringing to market autonomous ride-sharing as a mobility service at scale”, Toyota said in a statement.
Analysts said the move showed Toyota was motoring full speed ahead towards a driverless car future, in a race involving the world’s top auto firms as well as tech giants such as Google and Alibaba.
Technology from both companies will be integrated into purpose-built Toyota vehicles and deployed on Uber’s ride-sharing platform, with the first pilot rollout set for 2021.
“Hundreds of vehicles” would be involved in that first phase, a spokesman told AFP.
“The deal is the first of its kind for Uber and signals our commitment to bringing world-class technologies to the Uber network,” said CEO Dara Khosrowshahi.
The agreement came after the smartphone-summoned ride service began to rein in its solo effort to develop autonomous vehicle technology.
Uber suspended its self-driving car programme after a crash in March, which killed a woman pushing a bicycle in a street in the US state of Arizona.
Last month, the San-Francisco-based firm took a tentative step towards restarting the programme, putting self-driving cars back on the road in “manual mode”, with a driver at the wheel at all times.
The testing will enable Uber to gather data on different scenarios that will be recreated in computer simulations, and also develop more accurate mapping for the vehicles.