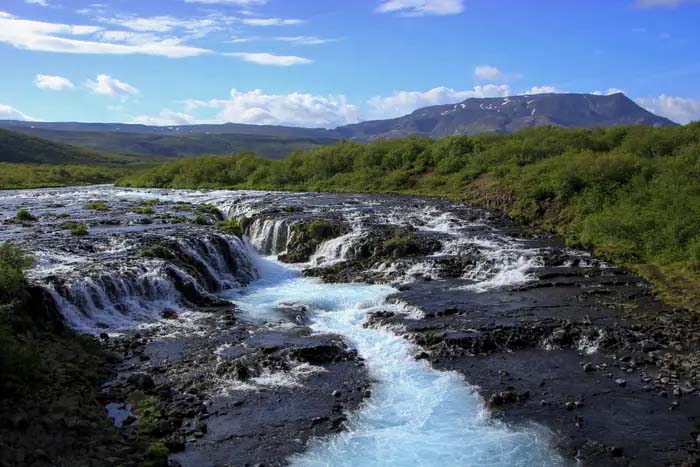 1.Iceland: “Brúarfoss Waterfall is somewhat hard to find, but it’s amazing. I almost don’t want to mention it because I had it to myself, even though it’s so close to a lot of the Golden Circle attractions and the more popular Gulfoss Falls.”
2. Agra: “The Taj Mahal is absolutely stunning in person. The detailed stone work is mind-boggling and the way sounds echo inside the main building is fascinating. Since you aren’t allowed to take photos inside, it’s really somewhere you have to see with your own eyes. Sure, it’s crowded AGRA but it’s still incredible to visit.”
3. United Kingdom: “Instead of visiting Stonehenge, I highly recommend Avebury Henge. Avebury is a village that was built within a much larger stone circle about 40 minutes away from Stonehenge. You can hike around the Neolithic monument and get right up close to the stones. It is still a bit ‘touristy,’ but much less so than Stonehenge.”
4. Bali: “Tirta Empul Temple. I traveled around Bali for the day with a local guide, and when he first took me to Tirta Empul, one of the largest and busiest Hindu temples, I was skeptical. It was so crowded with people I expected a giant tourist trap. But by the time I got to the holy springs and followed the ritual of cleansing myself in the water, I understood the hype and exactly why Bali is known as such a spiritual and peaceful place.” UNITED KINGDOM
5. Istanbul: “The Hagia Sophia in Istanbul is so worth it. It took me a while to get through the line, but when I finally got inside the bright morning rays of sunlight were shining through the windows and it was absolutely breathtaking. It’s one of the most beautiful buildings I’ve ever visited.”
6. Ireland: “The Cliffs of Moher are completely stunning, and photos do not do them justice. The entire country of Ireland is beautiful, but spending a few hours soaking in the views and the sunset from the Cliffs of Moher was a highlight of my trip.”
7. Peru: “I visited Machu Picchu and took an early hike up before sunrise with a lantern helmet. BALI
I watched the sun come up with a small group of travelers from all over the world. It was absolutely stunning and a highlight of my life thus far.”8. New Zealand: “Milford Sound on the South Island. For me, it’s tied with the Grand Canyon as the most amazing scenery on earth.”9. Alberta: “Banff National Park is home to tons of beautiful mountains, lakes, and glaciers. Unlike many popular tourist attractions, everything here actually looks just as gorgeous as it does in the photos.”10. Scotland: “The Scottish Highlands are absolutely incredible. Between the landscapes and the abandoned castles scattered all over, it’s incredible just to drive around and take in the views.”