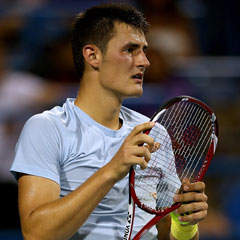 Australia’s Bernard Tomic qualified for his fifth ATP Tour final by defeating Alexandr Dolgopolov 1-6, 6-4, 6-3 in the semi-finals of the Mexico Open on Friday.

The fifth seeded Tomic posted his first win over Dolgopolov since the 2012 Australian Open.

“I am very happy to be in the final now,” Tomic said. “He is very tough. You just have to stay with him in the match.

“His level of play was too good in the first set. So I knew I had to stay with him and take advantage of my opportunities.”

Tomic, who had to overcome a slow start as he lost his serve three times in the first set, is 3-1 in career finals.

This is his first final since he won in Bogota last year. His opponent will be Austria’s Dominic Thiem, who ousted Sam Querrey 6-2, 6-2 in the other semi-final.

The women’s final will be a showdown between Slovakia’s Dominika Cibulkova and Sloane Stephens of the United States. Cibulkova easily beat American Christina McHale 6-3, 6-3 while Stephens cruised past Yanina Wickmayer of Germany 6-2, 6-0 in the semis.