‘Time to look forward’: Akbar not thinking of past laurels 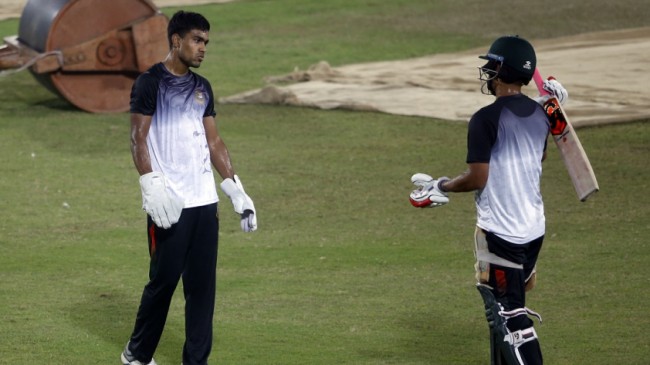 DOT Desk:[2] Bangladesh’s U-19 World Cup winning captain Akbar Ali said yesterday that the recently concluded BCB President’s Cup was a difficult lesson for him on a personal level,reports The Daily Star.[3] The BCB-arranged tournament sought to bring cricket back to the field following a seven-month long hibernation imposed by the coronavirus pandemic. The tournament had other motives as well, as the young guns from the recent U-19 World Cup winning side were pitted against and alongside more experienced national team and HP squad players. Akbar experienced the difference in competitive standard.[5] ‘Personally, it was a difficult experience but I got to learn a lot,” he said about the experience.[6] “We were there for more than a week and during that time we got to learn many positive things. I was in Tamim [Iqbal] bhai’s team along with [Anamul Haque] Bijoy bhai and [Mohammad] Mithun bhai and got to talk with them a lot. I got to know as much as was possible from them”.
and they gave a lot of good thoughts. Obviously, I can use their ideas and experience.

Akbar is currently undergoing a fitness and skills training camp with new HP coach Toby Radford. The camp began on 27 October and will end on November 12. Radford said that his primary focus will be on the basics of technique to improve quality of red-ball cricket.

Akbar, who had a few hitches during the President’s Cup, playing away from his body at times, said that he was enjoying the camp. About the new HP coach, Akbar said: “He has been watching our batting videos for the last two days and focusing on them. He will be able to give an output on how we can improve and what to focus on.”

Akbar was not ready to rest on the laurel of being a World Cup winner with the U-19 side. He already knew that the challenges in front are going to be more difficult. “It’s been nine months since our triumph. I don’t think anyone among us is still thinking about it, now it’s time to look forward.