Thousands of Palestinians in Gaza call for PA president’s ouster 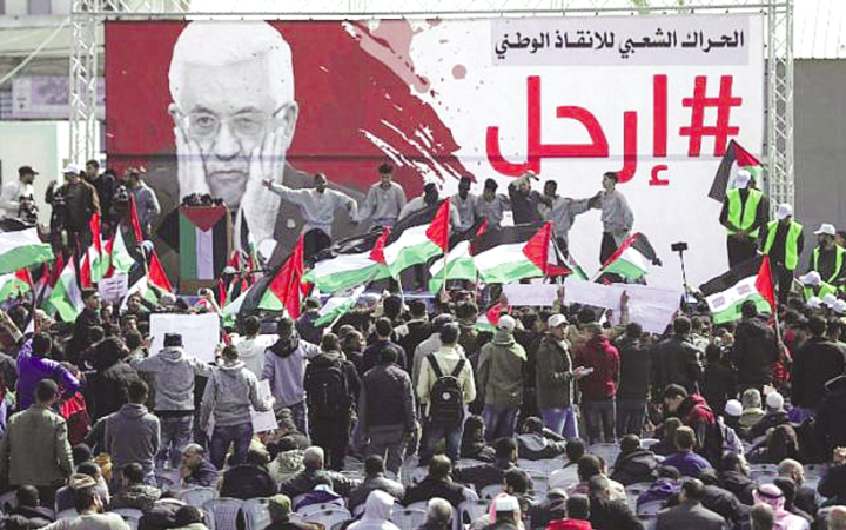 AFP: Thousands of Palestinians in the Gaza Strip participated in a rally on Sunday, during which they called for the ouster of Palestinian Authority President Mahmoud Abbas.
The protesters flocked to al-Saraya Square in Gaza City, where many of them held up posters calling on the 83-year-old PA president to step down.
A group called “The Popular Movement for National Salvation” said it organized the rally, but Talal Okal, a Gaza-based expert on Palestinian politics, and Fatah spokesman Osama Qawasma contended that the Hamas terror group stood behind it.
“While this is the first time this group has appeared, we know Hamas runs it and organized today’s demonstration,” Okal said in a phone call.
He also noted the demonstration could only have taken place in Gaza with the permission and coordination of the Hamas-run Interior Ministry.
Hamas has controlled Gaza since it ousted the Fatah-dominated PA in 2007 from the territory.
Pro-Hamas media heavily covered the rally, broadcasting it live on Facebook and publishing several articles and social media posts about it.
At the beginning of the demonstration, the protesters, many of whom were waving Palestinian flags, chanted: “Get out, get out, O Abbas. That is the demand of the people.”
Ziad Abu Taha, the spokesman of “The Popular Movement for National Salvation,” echoed the protesters’ chants and lambasted Abbas, who has served as PA president since 2005.
“The Popular Movement for National Salvation has come to affirm…the policy of tyranny, oppression, suppression and dictatorship that the president of the muqata deals with are on their way to non-existence,” Abu Taha said in a speech, referring to the PA presidential headquarters in Ramallah. “We came to say ‘get out’ after the Palestinian issue almost fell by the wayside.”
In recent years, Abbas has consolidated his authority, sidelining rivals in Hamas and Fatah and undermining the independence of the PA judiciary.
Abu Taha also lashed out at Abbas for maintaining security coordination between the PA security forces and Israel and cutting budgets Ramallah had allocated for its Gaza-based employees.
The PA president recently pledged to continue security coordination between Israel and the PA security forces, despite its widespread unpopularity among the Palestinian public.
Seventy-two percent of Palestinians support an unimplemented decision a Palestine Liberation Organization body made last year to stop security coordination, a December 2018 poll conducted by the Palestinian Center for Policy and Survey Research found.
Since April 2018, Abbas also has not paid the full salaries of PA employees in Gaza as a part of a policy to pressure Hamas to give up control of the coastal enclave.
Hamas leaders did not speak at the rally against Abbas, but Mushir al-Masri, an official in the terror group, slammed the PA president in comments he made to Al-Aqsa TV on Sunday.
Masri said Abbas was not a “legitimate” president and added he should be put on trial for “his crimes at the expense of the Palestinian people.”