Stuck in my mind The Syrian Conflict:: A further rout on humanity 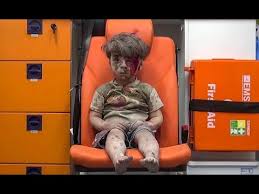 The recent images of a Syrian boy drenched in blood and dust have astounded the world once again. It has brought the gruelling realities of Syrian civil war. The boy, Omran Daqneesh who is roughly 5 years old stunned the world into silence when the images of his being rescue were published by world media.
The penalties of a war is always catastrophic and inhuman. The ongoing Syrian war has reminded us of the horrors and viciousness that can be brought upon mankind. Where words are not adequate to portray the acute fatalities of the country, the children are also not given clemency too. Children who are the figure of innocence and warmth, where there is no involvement of them causing the bloody war, are being slain every now and then in this valley of terror. Around 4,557 children under the age of 18 are killed in this war, the number tells us the horrendous familiarity the country is going through.
Last year in September, when Alan Kurdi, a three year old boy’s image lying dead on the Mediterranean sea shore brought storm of criticizing for the war. Alan and his family was trying to reach Europe to escape the war. His death brought the refugee crisis of Europe to spotlight.
More than 2,50,000 Syrians have sacrificed their lives in five years of armed conflict. The war began with anti- government protests before it took the shape of a full-scale civil war. In 2011, the concept of “ Arab Spring” revolts overthrown the Egyptian President Hosni Mubarak and Tunisian President Zine El Abidine Ben Ali. In March that year, when peaceful protests erupted in Syria after 15 boys were detained and tortured for graffiti in support of the Arab Spring. The Syrian President Bashar al- Assad, responded to the protests by killing hundreds of demonstrators and imprisoning many more. In, July rebels from Syrian army declared the formation of the free Syrian army, a rebel group aiming to overthrow the government.
Syria suffered a severe drought from 2007-10, which compelled the migration of more than 1.5 million people from the countryside to cities. This movement worsened poverty and unrest in the country. The religious minorities are supporting the Assad government while the majority Sunni Muslims are opposition fighters. When most Syrians are Sunni Muslims, they were dominated by the Alawite sect, of which President Assad is a member. The governments of majority- Shia Iraq and Iran support Assad, as does Lebanon based Hezbollah. On the other hand, Sunni majority states including Turkey, Qatar, Saudi Arabia and others fully supports the rebels.

An international coalition led by the US has bombed The Islamic state of Iraq and Levant (ISIS or ISIL) group since 2014. In September 2015, Russia launched a bombing attack against what is known as the Syrian terrorists. Russia is also deployed military advisers to help out Assad’s defenses. Several Arab states, along with Turkey , have provided weapons to the rebels. The ranks of ISIL include a sizeable number of soldiers are from around the world.

The Assad government currently controls the capital, Damascus , parts of Southern Syria , portions of Aleppo and Deir Az Zor. Rebel groups, ISIL and the Kurdish forces control the rest of the country. The Kurdish groups in northern Syria are seeking self-rule and that has taken aback the Turkey’s government with the fear that Turkey’s Kurdish population will become restless with this developments.
The Syrian war has created profound concern far beyond the country’s borders. Lebanon, Turkey, Jordan and Europe are facing a huge refugee crisis. The country suffering from traumatizing experience everyday and is in ruins for the consequences of the civil war. Losing huge number of its population who are eloping from the country for a safe destination, it will be extremely difficult for Syria to recover from the nightmare of this catastrophe.