The more Ukraine resists, the greater the danger to Nato. It should act now to stop the slaughter 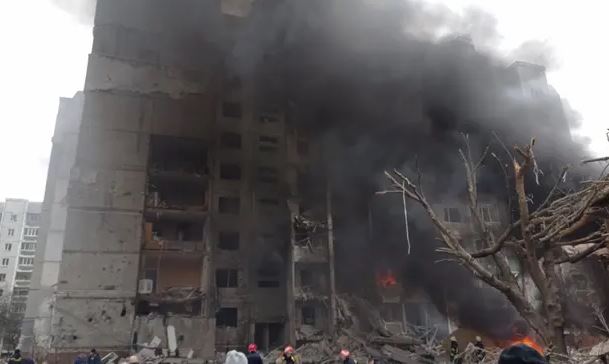 Can Ukraine weaponise time? As long as the will to fight exists, the country’s soldiers and citizens can hope to wear down, even to repulse, the Russian invaders. But their dilemma is a terrible one. As Vladimir Putin’s bombardments grow more barbarous and indiscriminate, the human cost of resistance is rising daily. If they hold on, will the western powers belatedly come to their rescue?
Time does not favour Russia’s president. Casualties are increasing. His Nazi-style military blitzkrieg didn’t work. His conscripts are reportedly demoralised, his war machine may bog down. His hubris is destroying Russia’s economy. Protests at home reflect a new political vulnerability. Putin is being tracked by war crimes prosecutors in The Hague.
For any rational leader, an immediate ceasefire, accompanied by a bogus claim of victory, would be an obvious way out. But logic and reason play no part in Putin’s “thinking”. This catastrophe recalls Iraq in 2003. How could anyone, however delusional, possibly believe a full-scale invasion was a good idea? The man Donald Trump calls a “genius” turns out to be really stupid.
To avoid defeat – to eventually win – Ukrainian resistance forces will need the west’s sustained, long-term military, logistical, financial and intelligence support. Will the allies, fresh from their Afghan cop-out, stay the course this time? Nato combat jets are nowhere to be seen in Ukraine’s skies – but there’s a whiff of betrayal in the air. Volodymyr Zelenskiy, Ukraine’s president, wants instant EU membership. He was cheered at the European parliament last week – but he will not get his wish. Kyiv is pleading for a Nato-patrolled no-fly zone to help stop the merciless bombing of cities such as Mariupol and Kharkiv. That isn’t happening, either.
Ukraine’s people are determined to fight on. It’s impossible not to admire them – but also impossible, or so western leaders appear to say, to protect them from mass murder.
Such bravery underscores the grave responsibility of western governments. Britain and the US, in particular, have encouraged resistance, sending missiles and lethal aid. Raising the stakes, Boris Johnson and Joe Biden portray the war as a defining struggle between freedom and tyranny, democracy and authoritarianism. That’s not the sort of war you can afford to lose.
Most European countries, plus Australia, Japan, Canada and others, have pledged open-ended backing, too. For the first time, the EU will supply weaponry. This is all very dramatic, perhaps suspiciously so.
Should Ukrainians trust these sweeping promises? What if the war lasts five or 10 years, which is not unusual for such conflicts? Fuelling an apparently endless, widely destabilising insurgency will require grit and consistency in London and other capitals.
Few western politicians, eyeing the next election, display such qualities. How long, for example, will German voters’ current outrage outlast the impact of higher bills and taxes to pay for non-Russian gas and vastly increased defence spending?
How long will Biden stay engaged if the crisis turns into a grinding war of attrition? He could be a lame duck after November’s midterms. Possible 2024 replacements, such as Trump, have a very different view of Nato and Russia. The longevity and reliability of public and political support for Ukraine is one question. Another will be how to meet the resistance’s need for an unceasing flow of arms, assistance, and staging posts and safe havens outside Ukrainian territory.The probability that displaced fighters, plus a European “foreign legion”, will seek bases in neighbouring Nato members – from which to launch attacks on the occupiers – is strong. Remember how the mujahideen, fighting the Red Army, and later the Taliban, fighting Nato, operated from Pakistan.