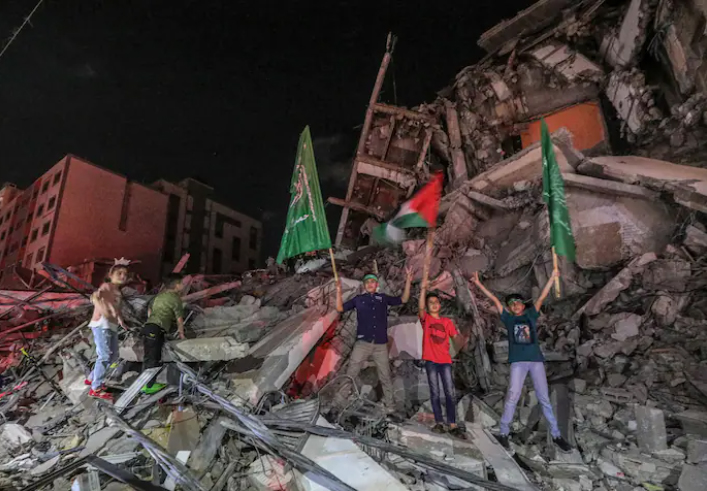 Jehad Abusalim is the education and policy associate of the Palestine Activism Program at the American Friends Service Committee. He is completing his PhD in the History and Hebrew and Judaic Studies joint program at New York University.On Friday, across the occupied Palestinian territories, and especially in the cities and towns of the Gaza Strip, Palestinians are taking to the streets in celebration — honking horns, shooting fireworks and sharing sweets. They’re celebrating a belated Eid, the holiday marking the end of the holy month of Ramadan, and one they were deprived of this year because of the brutal violence unleashed on Gaza by the Israeli military. They are able to do this because of the cease-fire that took effect Friday morning at 2 a.m., putting a halt to the Israeli airstrikes.
For my friends and family in Gaza, the cease-fire represents the end of 11 days of extreme and pervasive violence that killed at least 243 Palestinians, including 66 children. Some are celebrating mere physical survival. Others are in disbelief that they are still alive at all. Entire families were buried under rubble. Israel flattened important apartment buildings, homes, press offices, book stores and even health clinics.
For me, here in the United States, the cease-fire puts an end to 11 agonizing days of barely sleeping at night because of the fear of what I’ll wake up to. I’ve been checking my phone constantly for texts from my family that confirm they are still alive.
And yet I celebrate the cease-fire with ambivalence. That’s because, even though it puts a temporary end to the spectacular violence of the past 11 days, it will not end the everyday violence in Gaza and across the occupied territories that has been going on for 73 years. Along with other Palestinians, I’ve been surprised by the wave of global outrage at the Israeli military and solidarity with Gaza over the past few days. But I can’t help wondering whether the world will now look away from the slower destruction and death of the continued siege and occupation.
For the past 14 years, a suffocating Israeli blockade has trapped people in Gaza within a 140-square-mile area, barring us from even the most basic goods and supplies. Growing up during this blockade, the very passage of time felt violent for me.
It was the violence of minutes and hours spent without electricity, access to clean water, the ability to travel to other parts of the country and to the outside world, as cancer patients died while waiting for permits.
It was the violence of time passing in isolation in one of the world’s most-densely populated territories. Two million people currently live in Gaza. (The United Nations predicts that by 2050 the population of Gaza will rise to 4.8 million. Gaza is already one of the most densely populated areas in the world, but this will more than double the population density from approximately 13,000 people per square mile to 34,000 per square mile.)Israel’s state-building project has involved systematic erasure and removal of an entire people, destroying our homes and communities and rendering us refugees.In Gaza and throughout our homeland, this process of violent dispossession continues today, as Israel aims to ensure that it remains a Jewish-majority state, with maximum land for the Jewish population and a minimum of Palestinians. Palestinian refugees in Gaza are supposed to be forgotten as they live and die fenced off and
suffocating.

But the recent explosion of intense violence is also proof that Israel’s attempts to erase Palestinians in some areas and fence them off in others, hoping we will vanish, has failed. Palestinians are resisting. In East Jerusalem’s Sheikh Jarrah, they are holding on to their land. At the borders of Lebanon and Jordan, they are marching for their right of return. In Gaza, we are celebrating our survival as a people and hoping that the world is waking up to our plight.

In the United States, legislation introduced by Sen. Bernie Sanders (I-Vt.) in the Senate and Rep. Alexandria Ocasio-Cortez (D-N.Y.) in the House to block arms sales to Israel is a welcome move. Yet to stop the sustained violence, we need a new and creative vision for a fundamental change for the Palestinians and for Israel, one rooted in the principles of equality, justice and freedom.

We need policies that focus on the Nakba as the root cause and hold Israel accountable for its expansion and erasure of Palestinians. One good example is H.R. 2590, a bill that conditions aid to Israel on a cessation of human rights violations.

Most important, we need the world to keep paying attention and speaking out. Until the suffocating blockade ends and we see accountability for the war crimes committed against the people of Gaza, our freedom will remain incomplete.