Terror: The other template for opposition politics 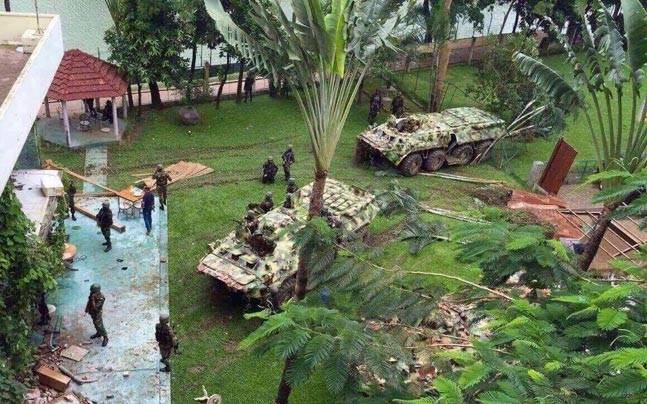 Protik Chakraborty, Works at the Centre for Research and Information (CRI)/BDnews24

On the day the Holey Artisan Bakery in Dhaka was attacked by terrorists, a Bangladeshi-origin academic in US went on television channels to describe the country as a “failed state”.
Hours later, when Prime Minister Sheikh Hasina sent in the army and the troops to free the hostages without much ado, the academic’s narrative disappeared into thin air.
Bangladesh’s economy is performing in top gear, with annual GDP growth crossing the seven percent mark.
Its social and human development indicators have become a taking point in the developing world, with Nobel laureates like Amaryta Sen holding up the country’s inclusive growth model with a human face as the role model for developing nations.
But not much is known about the high esteem in which Bangladesh’s counter terrorism model is held, even in US.
As far back as 2012, the US had appreciated Bangladesh’s role in combating terrorism saying its counterterrorism efforts made it harder for transnational terrorists to operate in or establish safe havens in Bangladeshi territory.
“Bangladesh has demonstrated its commitment to combating domestic and transnational terrorist groups,” the ‘Country Reports on Terrorism 2012’ of the US State Department said in its Bangladesh part.
It however blamed the country’s judiciary for being slow in processing terrorism and other criminal cases in general, which led to failures or long delay in securing convictions (US State Department Country Reports on Terrorism 2012: Chapter 2. South and Central Asia Overview).
Then, in the run up to the Jan 2014 polls, Bangladesh was hit by an orchestrated phase of political violence and terrorist actions aimed at secular thought leaders.
In Bangladesh, political violence by anti-Awami League parties and terrorist actions by the likes of JMB have often been linked together.
And so it was in the run up to the Jan 2014 polls.BNP and Jamaat activists firebombed buses and trains as secular bloggers, writers, publishers and even folk artists symbolic of Bangladesh’s syncretic culture were assassinated.
Then came the Holey Artisan Bakery attack. Not only were the terrorist there eliminated but what followed was an eye opener.
Within a year, Bangladesh’s counter terrorism grid, which brings together police paramilitary forces and specialist elements of the army backed by intelligence agencies, had managed to neutralise the top leadership of the jihadist groups.
In sheer desperation, these groups deployed suicide bombers.
But most of these bombers were also neutralised when preparing for action in holed up hideouts.
The nation witnessed harrowing images of men in uniform encircling high rise buildings and rescuing hostages before neutralizing suicide bombers.
The rescue in Sylhet by soldiers earned the praise of Indian military veterans. Later a top US counter terrorism expert credited Bangladesh for better anti-terrorist performance “than our own FBI.” He said that Bangladeshis was still weaker on SIGINT and cyber surveillance but very strong in traditional policing like chasing up leads aggressively after hard interrogation (‘Suicide attacks intensify Bangladesh’s rising radicalism’ by Subir Bhaumik/Asia Times, Apr 3, 2017).
For much of 2018, Bangladesh has been largely free of the scourge of terrorism.
But there is no cause for complacency.
Since Islamist radicalism is a political weapon of the anti-Awami League opposition, it is likely that terror attacks, including the mindless bombing of public places, may resume in the run-up to the forthcoming parliament polls
The opposition seeks to use terror attacks to discredit the Awami League and secular forces and portray it as a failed state.
It is a potent weapon to score a political point. The killing of foreigners, both targeted, as in the Kunio Hoshi case or like in the Holey Artisan attack, is designed to drive away investments and scuttle development projects like the Dhaka Metro Rail as the success of such projects is seen as further reinforcing the image of the ruling party and its leader Sheikh Hasina.
It is this image that has repeatedly been reflected in public attitude surveys by a host of foreign think tanks like the US based IRI, which operates under the US National Endowment of Democracy.
These surveys have given high public approval ratings for the ruling party and the prime minister, exposing the lie of opposition propaganda that the Awami League is destined to fare miserably in a fair election.
The opposition will try to raise this stink again to discredit the ruling party, but in Bangladesh terrorism is often the last resort of failed politicians.
In the run-up to the parliament polls, one could well see some startling terror attacks like an explosion on some stretch of the Padma river bridge or a busy shopping mall.
But intelligence has already received reports of a systematic assassination campaign planned by Jamaat-Shibir combine targeting ruling party politicians and senior police officials to demoralise party workers and law enforcers ahead of the polls.
The terror acts could well follow the Oct 10 verdict on the 21 Aug grenade attack, which was the bloodiest terror strike of the political kind in recent memory, but one that broadly follows the complete annihilation model of the 1975 coup or the murders of intellectuals in the last days of the Liberation War.
The Bangladeshi academic who so ardently wishes the country to be a failed state was strangely silent from 2001-06 during the BNP Jamaat regime when Islamist terror reared its ugly head and leading analysts like Bertil Lintner describe Bangladesh as the Cocoon of Terror” and Elisa Griswold predict an Afghan style Islamist Revolution (‘A cocoon of terror’ by Bertil Lintner/Far Eastern Economic Review, Apr 4, 2002. ‘The Next Islamist Revolution?’ by Elisa Griswold/ The New York Times, Jan 23, 2005).
Can anyone doubt that it is present government which prevented that downslide by its demonstrated zero tolerance towards terror?
Victims of terror like the Bangabandhu family can always be counted on to fight it, not those who politically benefit from it.
Protik Chakrabortyworks at the Centre for