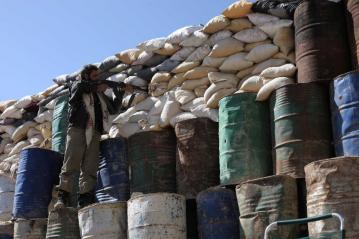 Calm prevailed Saturday across much of war-ravaged Syria on the first day of a landmark ceasefire, as a task force led by Moscow and Washington prepared to begin monitoring the truce.

On the stroke of midnight, firing stopped in suburbs around the capital and the devastated northern city of Aleppo, AFP correspondents said, after a day of intense Russian air strikes on rebel bastions across the country.

The nationwide cessation of hostilities, which does not include jihadist groups, is the first pause in a five-year civil war that has claimed 270,000 lives and displaced more than half the population.

“I can’t hide the fact that I’m happy the war has stopped, even for a few minutes,” 24-year-old regime soldier Abdel Rahman Issa said from a battlefield on the eastern outskirts of Damascus.

“If it continues like this, maybe we can go home.”

He told reporters the special task force would meet in Geneva on Saturday and that a system had been created to deal with violations.

The task force, created by the 17-nation International Syria Support Group, would meet to “monitor and check” what has been happening on the ground, De Mistura said.

Moscow and Washington, co-chairs of the task force, have set up rival offices to oversee the truce along with a UN operation centre and would be first to deal with any infractions.

De Mistura said it was important that any incidents are “quickly brought under control” and a military response should be the “last resort”.

Calm held throughout the night in Aleppo city, where residents said they were considering taking their children to a rare visit to the park.

And the skylines around Damascus did not feature the typical plumes of smoke or sounds of shelling in the early morning, AFP correspondents said.

The Syrian Observatory for Human Rights, a Britain-based monitoring group, said it was also relatively quiet in the central provinces of Homs and Hama.

The ceasefire, brokered by the United States and Russia, which back
opposing sides in the war, does not apply to the Islamic State jihadist group or Al-Qaeda-affiliated Al-Nusra Front.

Intermittent clashes between pro-regime forces and both groups continued Saturday morning in Aleppo and Latakia provinces, the Observatory said.

An explosion killed two soldiers outside the town of Salamiyeh in Hama province, where IS is present.

Previous attempts to end the violence in Syria have failed and both Russia and the United States have warned that stopping the fighting on the ground will be difficult.

Analysts have also questioned whether the agreement can be effective given that it does not include IS or Al-Nusra Front.

Less than an hour before the ceasefire began, the UN Security Council gave its unanimous backing to the truce in a resolution drafted by the US and Russia.

US Ambassador Samantha Power acknowledged there was “some scepticism” as to whether the ceasefire would last, but said it offered the “best chance to reduce the violence”.

Russia began air strikes in Syria in September, saying it was targeting “terrorists”, but critics have accused Moscow of hitting rebel forces in support of the regime.

Russian Deputy Foreign Minister Gennady Gatilov said Friday that the agreement could “contribute to a turning point” in the war, even as Russian planes launched a wave of attacks on non-jihadist rebel areas ahead of the truce. Once the truce went into effect, air strikes appeared to halt altogether, Observatory head Rami Abdel Rahman said.

In televised remarks, Russian President Vladimir Putin insisted Moscow would continue targeting “terrorist groups” because “there is no other way.”

US State Department spokesman Mark Toner said Washington had received assurances from Moscow that it would not bomb the “moderate opposition” after the truce.

“I don’t know how to put it any better than saying: ‘It’s put up or shut up time,'” he told reporters.

Iran, another key ally of Syrian President Bashar al-Assad, has said it is confident the regime will abide by the agreement.

But rebel groups on the ground have been less optimistic, and Al-Nusra’s chief Mohammad al-Jolani on Friday urged regime opponents to intensify their attacks.

“Negotiations are the ones conducted on the battlefield,” he said in an audio message.

It said Damascus and its allies must stop attacking rebel forces “under the pretext of fighting terrorism”.