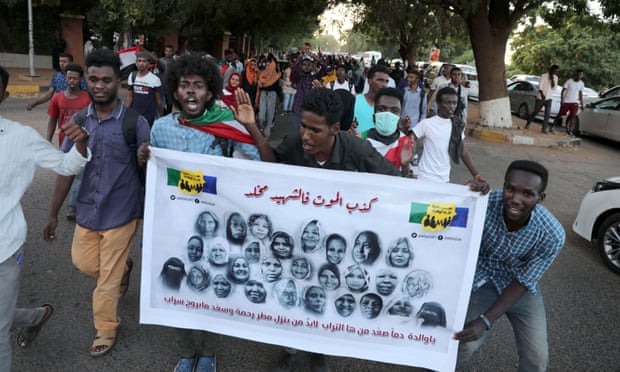 The Guardian: [2] Sudanese security forces systematically planned and coordinated a series of deadly attacks that killed 241 pro-democracy protesters and injured hundreds more at a Khartoum sit-in last year, an inquiry has found.
[3] Authorities “purposefully pre-positioned” state security forces armed with tear gas, whips and assault rifles in the month before the protests began, and “intentionally targeted” medical personnel and facilities during and after the protests, according to the New York-based advocacy organisation Physicians for Human Rights (PHR), which led an investigation into the violence.
[4] The findings were based on interviews with 30 survivors of the 3 June massacre, eyewitness accounts, and analysis of thousands of still and video images of the protests, among other sources of information. They contradict previous theories that the attacks on the protest camp were spontaneous, or the work of “rogue” military personnel, as a government-led inquiry indicated.
[5] “The June 3 massacre against Sudanese civilians at the hands of government security forces is an egregious violation of human rights,” said Phelim Kine, PHR’s director of research and investigations.

“Security forces’ horrific tactics – sexual violence, including rape, use of tear gas, whips, batons, and live ammunition – killed and critically injured hundreds of civilians. To support the national commission charged with investigating these crimes, the Sudanese legal and human rights community, as well as international bodies such as the United Nations and the African Union, must conduct further investigation into the full scope of government-perpetrated violence on June 3.”