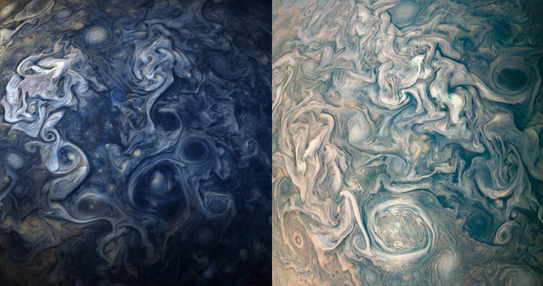 Truth Theory: [2] NASA have published a never-before-seen array of breathtakingly stunning images of planet Jupiter as captured by their Juno spacecraft. [3] NASA believe that unlocking the secrets of Jupiter will shed light on how the solar system came into existence. [4] “Juno will let us take a giant step forward in our understanding of how giant planets form and the role these titans played in putting together the rest of the solar system,” read a statement on NASA’s website.
[5] “Juno’s principal goal is to understand the origin and evolution of Jupiter. Underneath its dense cloud cover, Jupiter safeguards secrets to the fundamental processes and conditions that governed our solar system during its formation.” [6] Juno is planned to orbit around Jupiter for 41 months. NASA have set the end of the mission for July 2021. [7] The fifth planet from the Sun, Jupiter is the largest in the Solar System – two-and-a-half times all the other planets combined. It has 79 moons. [8] Jupiter lacks a well-defined solid surface and is made up primarily of hydrogen, as well as helium and other heavier elements in its rocky core.
[9] Researchers are interested to find out how much water is in Jupiter’s atmosphere. They also want to measure the atmosphere for composition, temperature and cloud motions.

With an vast array of instruments on board Juno, scientists will also be checking for the presence of a solid planetary core and will map out Jupiter’s magnetic field and observe the presence of auroras.