Students block airport road after one dies in accident 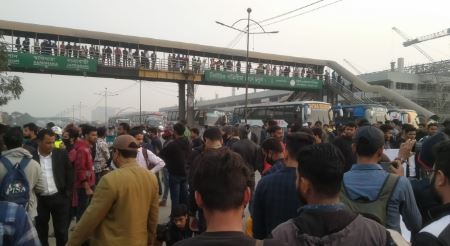 AFP: Hundreds of students have blocked the airport road after a student of Northern University of Bangladesh died in a fatal road accident in the capital yesterday.The students took to the streets of Kawla footover bridge area and vehicles were seen stuck in gridlock towards Badda-Kuril from Airport area. Pedestrians were seen making their way around the traffic.
The deceased has been identified as Nadia, a fourth year student of the university’s Pharmacy department. Her body was sent to Shaheed Suhrawardy Medical College and Hospital for autopsy.
Nadia was riding a motorcycle with a friend and was fatally crushed under a Victor Paribahan bus in front of Jamuna Future Park in Kuril Bishwa Road area yesterday morning. ABM Asaduzzaman, officer in charge of Vatara Police station confirmed the matter to The Business Standard.
The driver and helper of the bus fled the scene and the bus was seized immediately.
Protestors are chanting slogans in demand of road safety.