Starstruck: The bizarre twist on stars in their eyes that will make your soul feel empty 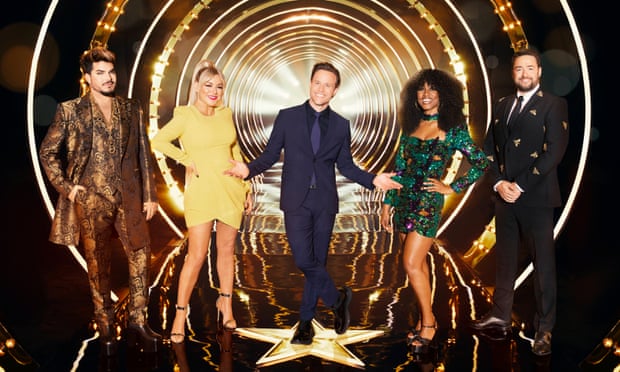 Do we really deserve good TV? It’s a question I have been mulling over since being subjected to Starstruck (Saturday, 8.30pm), ITV’s bombastic new panel show designed for five or so million people to eat a takeaway to. It’s an over-glossy mashup of Stars in Their Eyes and The X Factor, which is very, very bad in a way that makes my soul feel quite empty and my mind quite blank. Is it just the presence of Olly Murs as the host that is doing this, or is there something even more ghoulish and hollow baked into the very format of it? The only way to find out, sadly, is to make me watch an entire hour of it so you don’t have to. This is the first time since writing this column that I am going to actively ask for danger money.
Here is the format of Starstruck: instead of letting one singer trot out and do a celebrity tribute act, three complete strangers come out and sing the same song together at once – so three Freddie Mercurys might sing I Want to Break Free, line-by-line or three Ariana Grandes might squabble over a rendition of One Last Time. There is something very mildly interesting about watching three singers try to perform a cohesive song while also trying to outshine each other at the same time – fans of the Kitty Brucknell series of The X Factor will recognise this delightful energy from the group songs that used to open the show – but that’s where the entertainment begins and ends.
To judge the performances, ITV has assembled one of the strangest and most erratic judging panels I’ve ever seen on TV (we were warned when Amanda Holden started judging Britain’s Got Talent that this would happen to judging panels, but we refused to listen): Beverley Knight, an immaculately styled Jason Manford, Sheridan Smith and Queen singer Adam Lambert. Between them, they do all the TV judging tics and tropes they are meant to do – they put both palms flat on the table and lean forward, mouthing: “OH MY GOD!” to another judge. They clap above their head while standing up inelegantly in an outfit that is not designed to be stood up in, and hold their temples in sheer astonishment after hearing half of one opening note. They give each of the three teams effusive, breathless compliments, then at the end of the show the members of one team sing off against each other and the best performer goes into some abstract, distant “final”.
The problem here is that a lot of the singers aren’t actually very good, so to hear the judges outrageously praise them rings utterly, dreadfully hollow. I am not going to name names, but at least three performers in the opening show deliver woefully flat notes (they only have to sing one-third of a song each! They’ve had all week to practise! Why are they still rubbish?) and a couple of them are quite noticeably out of time.I mean, this is fine – these are not sins – but if an idiot with a tin ear (me) can hear it, so can an audience at home. So when Adam Lambert throws both arms up in the air and says: “That. Was. Amazing!” and Beverley Knight says it was like “looking at someone famous”, you sort of go: well, it wasn’t, though, was it? They’ve spent more than six hours in hair and makeup and they are doing it on TV, and millions of people can see that it wasn’t very good. So why say it was good? Why is everyone in the studio clapping as if it were good? Why is Olly Murs laughing? He shouldn’t be laughing. He shouldn’t be encouraging these people.
One immutable truth about this country is: we always think someone absolutely smashing it at karaoke is entertaining, and we will until the sun engulfs the Earth. But I can’t help feeling that Starstruck has been completely informed by the bombastic Saturday night TV that has come before it – that golden The X Factor run! The half-term-saving Britain’s Got Talent series! Dancing on Ice! The Masked Singer, almost! – in a way that feels as if it’s shaping future iterations of this, too. In 10 years’ time, ITV will still have a Saturday night singing show.
In 20 years, too, and 30 more after that. What caricatures of TV panel judging will we be watching by then, I wonder?