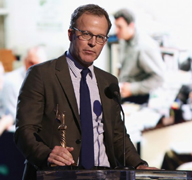 “Spotlight” triumphed Saturday at the Spirit Awards, the latest of a string of honors it has picked up in Hollywood’s annual prize giving season, with the Oscars just one day away.

The movie, about the Boston Globe’s investigation into child sex abuse in the Catholic Church,took best film as well as best director for Tom McCarthy and best screenplay.

“I was really fortunate to get this cast. If you’ve seen my other movies I don’t always go with the most well-known cast. But this really needed it,” he said.

One of the stories of the ceremony, which opened amid thick fog on Santa Monica beach, was Ghanaian youngster Abraham Attah winning best actor for his portrayal of an African child soldier in “Beasts of No Nation.”

Attah had never acted before he attended one of the open casting calls held in his hometown of Accra at the age of just 13.

His castmate, British actor Idriss Elba, picked up best supporting male as an army commandant in the film, and paid tribute to the people of Ghana.

“I’m half Ghanaian, it was my first time in Ghana. It was incredible, it was like a homecoming for me,” he said.

Best actress went to Brie Larson, who is also tipped to win the category at the Oscars for playing a kidnapped mother in “Room.”

One of the loudest cheers went to transgender actress Mya Taylor, who won best supporting female for drawing on her own experiences to portray a trans sex worker in “Tangerine.”

“The struggle was real for me, and I got out of it,” she told reporters.

The Film Independent Spirit Awards are seen as an strong indicator of independent movies that could win Oscar glory.

“Spotlight,” which is competing with “The Revenant” and “The Big Short” in many of the main categories at Sunday’s 88th Academy Awards, also won best editing and a special prize for its ensemble cast.

It has swept a string of honors ahead of the Oscars, including top prizes from the Screen Actors Guild and the Writers Guild of America, as well as a screenplay award at Britain’s BAFTAs.

McCarthy told reporters on the arrivals red carpet he hadn’t felt any nerves ahead of the Spirit Awards — but would be “a wreck” at the Oscars.

One disappointment at the Spirits was “Carol,” the story of a 1950s housewife who falls for a store clerk.

Starring Cate Blanchett and Rooney Mara, it was nominated in six categories, including best feature, best director and best actress, but won just one trophy for Ed Lachman’s cinematography.