SPD leader rejects any German role in war in Syria 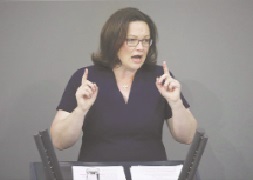 Reuters: The leader of Germany’s Social Democrats said on Monday her party would not approve any participation of Germany in the war in Syria, opening a potential new line of conflict in Chancellor Angela Merkel’s loveless coalition government. SPD leader Andrea Nahles issued a terse statement after the Bild newspaper reported that Germany’s conservative-led defense ministry was examining possible options for joining U.S., British and French forces in any future military action if the Syrian government again used chemical weapons.
“The SPD will not agree – either in parliament or in the government – to the participation of Germany in the war in Syria,” Nahles said. “We support the foreign minister in his efforts to avert a humanitarian crisis through discussions with Turkey and Russia.”
Bild reported on Monday that a senior German defense official had met the newly arrived U.S. defense attache last month to discuss possible German support for a military alliance against Syrian President Bashar al-Assad.
Russian and Syrian jets and helicopters on Sunday resumed intensive strikes in Idlib and Hama as Damascus stepped up its assault on the last major stronghold of rebel forces.
Bild said German and U.S. officials had discussed various options, including the possibility that German fighter jets could help with battle damage assessments, or drop bombs for the first time since the war in the former Yugoslavia in the 1990s.