So ‘Birthday Girl’ Finally Stepped Down 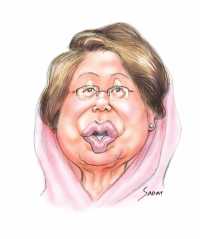 How many people does it take to convince BNP Chairperson Khaleda Zia, about the meaning of the National Mourning Day, and how much it means to a lot of us? Apparently, a lot, and two decades. For about last two decades, on a starry night Honorable Ex-Prime Minister Begum Zia suddenly realized that, it is her birthday tomorrow. Since then, she has been celebrating her special day each year on 15th August, in quite a grandeur manner. Despite the fact, rest of the country was commemorating the nation’s greatest shame and loss of the Bangabandhu, Sheikh Mujibur Rahman. We have seen, how obscene politician might get for shifting attention toward them. Even USA has an attention w… like Donald Trump. But messing with the birthdate, or just to reclaiming it on the day, on which a founding father of a political party died, is just seems a bit pathetic. Also, when he supposed to be the founding father of the nation as well. Well, those are in the past now. Khaleda Zia strongly stated in a press conference back in April that, she demands that media excludes the national politicians out of any of their debates. Okay, let us try to chuckle a bit less then. But, least we can admire her to least make one good/holy decision in life. She kind of hinted this last year as well, in her last ever birthday celebration on 15th of August that, she might restrain herself from celebrating it this year. She kept her word, and asked her fellow party members not bring any pretty cake at the head office of the Chairperson.
BNP Standing Committee Gayeshwar Chandra Roy also wants to take some credit in convincing her. He himself announced about their mournful news that, Begum Zia will not be celebrating her birthday this year ‘because’, she feels bad for the destructive losses in the flood, unstable security conditions, threats from terrorists, and mass arrest of their committee members for past year. Kind of makes me wonder, did she already knew about the flood and terrorist attacks would happen this year, when she first hinted last year that, she would not be celebrating her birthday this year? Fortuneteller? Something to think about. Anyway, let us just be glad for the fact that, she and her fellow advisors made one sane decision for once. Let us not chuckle about this news.
Begum Zia strongly believes that, her birthday is on 15 August 1945. Though, her passport screenshots say, 05 August. Some even claims, her birth year was on 1946. Well, every woman likes to keeps their age mysterious, and also decrease it in the process. We should not judge her on that. But few of the retrieved pictures of her passports (published in the DailyStar), one indicates to be just from over a decade ago. Which proves her birthday to be on 5 August. May be she put her birthdate wrong in the passport form by mistake, ‘twice’. Or multiple times. Though, some of her fellow BNP members said, this was trickery of Adobe Photoshop. Begum Zia’s birth certificate also came into public from an anonymous source, that observed her birthday to be on 5 August. Only God knows, what goes around in a woman’s mind.
Begum Zia was humbly asked by the current honorable Prime Minister Sheikh Hasina personally, at least not to cut a cake and not to throw such grandeur party on the day of her father’s, and nation’s father’s passing day. (After all, just saying ‘the passing day’ does not do it right. It was the most tragic event in history of Bangladesh.) But Begum Zia got offended and refused to do so. 15 August was the biggest celebration day for BNP members all over the country for quite some time now. Some say, Sheikh Hasina and Begum Zia again had a conversation considering the matter later. Which is why Begum Zia was hinting to stop celebrating her birthday on this day. Realizing, her small form of realization, the Krishak Sramik Janata League President, Bangabir Kader Siddique decided to give her a visit, about two weeks before this controversial day of Begum Zia’s life. On 4 August, he personally talked with her and asked not to celebrate her birthday this year. Hearing the news, some of her advisors and supporters also joined in convincing her about it.
One of their strong supporter, professional leader Zafrullah Chowdhury also met with her about the matter. Considering everything and mentioning that, Begum Zia also herself mourning for, the destructions caused by this year’s flood, terrorist attacks and her beloved convicted fellow supporters serving in jail. Therefore, her heart is heavy as well, and forbid any of the standing committee members not bring any cake to the BNP headquarter or anyone from celebrating her birthday yesterday, on 15 August.
In 2016, 15 August was only and truly (may be for the first time) dedicated for the mourning for the tragic loss of our nation’s father, Sheikh Mujibur Rahman.