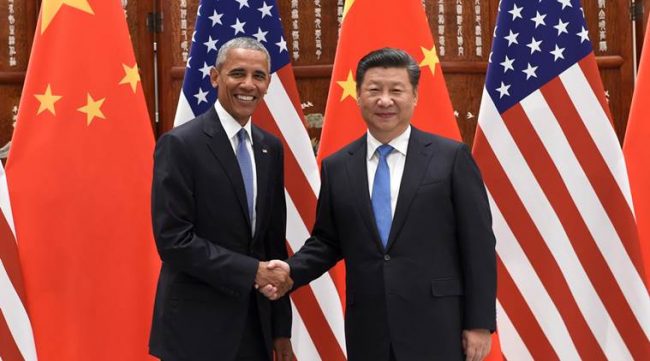 U.S has been interested in China for a long time. The first ship sailed from New York under the U.S. flag in 1784 was the merchant ship “Empress of China”. American interest in China was mostly economic. The British refused to deal with America and the Chinese showed their interest to work with America. Many Chinese saw America as a land of opportunity, just like other immigrants from Europe did. Chinese people immigrated to America during the California Gold Rush and more helped to build the transcontinental railroad. Many Chinese leaders believed in American political system. Sun Yat-Sen, the father of the modern China, overthrew the ‘Qing Dynasty’ in 1911, believing on those principles.
The result of the commercial and political connections was that the relations between USA and China were good for much of history. In the late 1800’s the European powers and Japan were expanding their colonial empires. They wanted to break China up into colonies. But the USA wanted China to remain independent and united for its own interest. USA supported an Open door policy for China which will allow foreign investments in China. America’s this policy was prevailing till the WWII. Japan tried expanding its empire in the 1930’s and USA didn’t like the violation of Open door policy. American’s opposition of Japan’s expansion in China led U.S to deploy its Pacific fleet to Pearl Harbor. Japan attacked Pearl Harbor on December 7, 1941 that led USA to participate in the WWII.
Since 1949, after the communist rule was established in China, Sino-US relations have evolved from tense situations to a complex mix of intensifying diplomacy. There was growing international rivalry and increasing amount of trade between the countries. Chinese communist party chairman Mao Zedong established the People’s Republic of China after peasant backed communist party defeated the nationalist government of Chiang Kai-Shek. Chiang and thousands of  his supporters flee to Taiwan. The USA backed the Nationalist against the invading Japanese forces during the WWII. That made the relations between USA and China limited for several decades.
When North Korea invaded South Korea on 25 June 1950, China was in support with the North Korea. On the other hand USA along with the United Nations backed South Korea. USA and Chinese troops fought against each other in the Korean War. On March 1959, when there was a wide-spread uprising occurs in Lhasa, thousands of people died in ensuing crackdown by PRC forces. And the Dalai Lama fled to India. The United States joined with United Nations in condemning the human rights violations in Lhasa. In October 1964, china joined the nuclear club by successfully conducting nuclear test. The test was done amid the escalating tension between US and China during Vietnam War. In the 1960’s Sino-Soviet relations were in strain. Tensions were arising because of development model, ideological and security differences. Soviet took away all advisors from China because of Mao’s controversial ‘Great Leap Forward’ radical industrialization policies. Moscow took the rival position for China, replacing Washington. In 1971, during the Bangladesh liberation war, Pakistan helped China to improve the relations with USA. China invited USA players to play ping-pong in Beijing in April, 1971. That was the first time after1949; Americans were allowed to visit China. In July 1971, US secretary of State, Henry Kissinger paid a secret visit to china. Soon after that United Nations gave China a permanent seat in the Security Council. In 1972, President Richard Nixon reestablished relations with China. Nixon hoped to balance the relations with China to counter USSR. Chinese leaders were respectful towards US, because they were worried about USSR too. Chinese leader Deng Xiaoping tried to bring China close to the West. He opened the Chinese economy but political liberalization was prevented. The result was China, emerging economically.
In 1989, the killing of protestors in Tiananmen Square happened. The Tiananmen massacre and the cold war politics reshaped the Sino-US relations. When USA was having its war in the Balkan, the NATO mistakenly bombed the Chinese embassy in Belgrade in 1999. The Chinese authority was not happy about it. China’s lack of respect for human rights, trying to steal American technology, its growing military power put America in fix , whether they can work with China or not.
Today China and USA work together but they don’t trust each other. They are the largest economies of the world and they have a financial and trading relationship that shapes the world. Most of the time, they have different and opposing views on national security and foreign policy. Washington and Beijing disagree how to deal with the countries like- North Korea, Iran and Syria. China is not worried about the spreading of nuclear weapons. Pakistan is its close friend, which spread nuclear weapon technology around the world. Most recently, the world’s two largest economies, also the world’s two biggest polluters, ratified the Paris climate agreement in September 2016, cementing their partnership on climate change and offering a rare display of harmony. The USA’s relationship with China is long, rich and complex. They should work together but they should keep it mind that any conflict in their relation will severely affect the whole world.