Significance of Mind over Matter 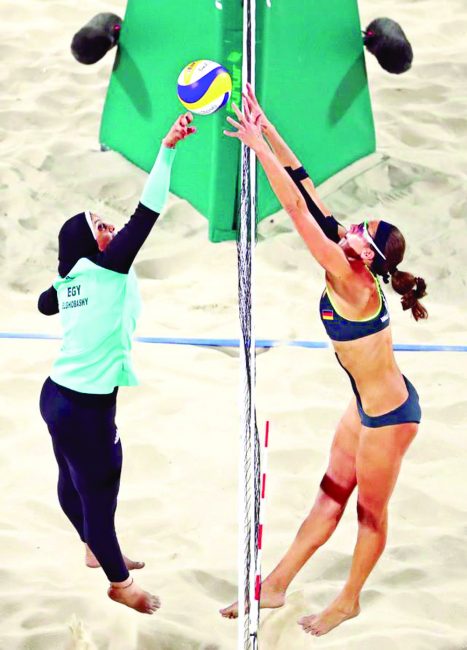 The Picture, taken during the women’s beach volleyball preliminary round match between Egypt and Germany on August 7, has ascended an immense contradiction between two point of views. Some made it a perfect visualization of the ideal of “blending sport with culture and education” and some slurred it as a “massive cultural divide”. I certainly would give my precious (you wouldn’t want to know what that is!) thing up to know what was in the minds of the two athletes.
Of course, the internet was quick to theorize that this is a portrait of some kind of a clash of civilizations, between the two women and their teams. Some even yanked this issue towards body shaming. But eventually all of those assumptions totted up in two different directions which ended up being inductive.
Sure, call this a collision of culture and criticize either one of them for wearing a little too less or more, but wouldn’t it seem less illustrative of a massive divide than of a strong commonality? Has wearing a bikini or a hijab ever kept any women on safe side? Both of these choices tend to provoke problematic stereotypes of women—an assumption of religious imposition on one side, and one of willing sexual objectification on the other.
Maybe you would like to call this a unifying power of sports. But would you be able to do so after knowing that up until the 2012 Olympics, female volleyball players were obliged to wear bikinis (with the lower part no more than 7cm from top to bottom at the hip) or a one-piece swimming costume – a rule which some regarded as a transparent attempt to make the sport sexy. The obligatory rule of this sport clearly made it less unifying than it seems.
What one has to apprehend from this picture is that it’s not a battle of cultural unity or clash these athletes are facing. It is about not being able to fix their mind over matter. Being bound to follow the rules that were made without their consent.
At first, the mandatory bikini policy was adopted, as the Australian Sports Commission noted in a fact sheet on “sexploitation” in sports, to “intentionally to focus attention on the athletes’ bodies rather than for any technological, practical or performance-enhancing reasons,” and many athletes had to wear them despite not being thrilled about it. Then, in 2012, the International Volleyball Association decided to allow less revealing uniforms, explaining the change as a step toward inclusion—an acknowledgement that the bikini does not fit the religious and cultural norms of many of the countries that take part in international competitions. This decision might have saved some athletes from wearing the uncomfortable clothes but it was still ‘a less revealing version of a bikini’.
And now when an athlete emerged wearing an uniform covering her full body, the reactions shows how much a female athlete’s body is understood as a public possession. Either it must be seen, or it must not be seen, but either way, their sporting committees, countries and cultures get to decide rather than the individuals. So the question should not be about how this picture shows the so called cultural gap or unity this sport is bringing, it should be about whether the athletes should have been able to decide what to wear from the very beginning to avoid such drastic scrutiny. We should know that we can only mould something rather than making it from the scratch to keep its novelty. As the famous quote of “Bucky” Fuller says-
“You never change things by fighting the existing reality. To change something, build a new model that makes the existing model obsolete.”