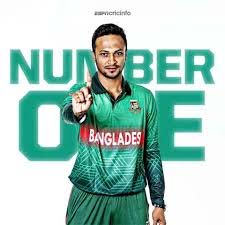 ICC: Bangladesh captain Shakib Al Hasan will enter the ICC T20 World Cup on top of the world after he was elevated to the No.1 spot for all-rounders on the latest MRF Tyres ICC Men’s T20I Player Rankings.
Shakib claimed top billing on the back of an excellent tri-series against New Zealand and Pakistan, with the veteran hitting consecutive half-centuries during Bangladesh’s final two matches. That form saw Shakib move in front of Afghanistan ace Mohammad Nabi and in to the top ranking for all-rounders, ahead of Bangladesh’s T20 World Cup campaign in Australia.
Namibia star JJ Smit (up four places to fourth) and Zimbabwe veteran Sikandar Raza (up four spots to seventh) make eye-catching moves on the list for all-rounders following impressive starts to their T20 World Cup tournament, while the race for the top batter ranking looks one to keep an eye on over the next few weeks Down Under.
Pakistan opener Mohammad Rizwan (861 rating points) further extended his lead at the top of the T20I batter rankings after yet another consistent showing during the tri-series in New Zealand, while India starlet Suryakumar Yadav (838) is still second ahead of the blockbuster clash between the two sides at the MCG on Sunday.

Rizwan’s skipper Babar Azam (808) is third on the T20I batter rankings and the trio look set to battle it out for the top spot over the remainder of the T20 World Cup.

The only movement inside the top 10 following the latest rankings update for batters saw aggressive New Zealand right-hander Glenn Phillips jump an impressive 13 spots to equal 10th on the back of his strong tri-series efforts against Bangladesh and Pakistan.

There was some slight movement inside the top 10 on the updated list for bowlers, with Mujeeb Ur Rahman (up two spots to fifth) and South Africa counterpart Keshav Maharaj (up one place to eighth) on the move.