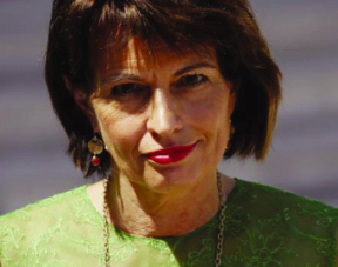 Reuters
A Swiss minister who backs strong ties to the European Union announced on yesterday she planned to quit, the second to do so this week, amid efforts by the country to wrap up talks with the EU on renewing bilateral ties.
Switzerland and the EU, its biggest trade partner, have been negotiating a new treaty, but the talks have met opposition from both right-leaning parties fearful of a loss of sovereignty and from leftists who fear it could undermine protections for Swiss workers and companies. Transportation and Energy Minister Doris Leuthard, from the center-right Christian Democratic People’s Party and the longest serving minister in the current cabinet, said it was time to make way for “new, fresh forces” to join the government, without elaborating. On Tuesday Swiss Economy Minister Johann Schneider-Ammann, from the pro-business Liberal Democrats and also an advocate of robust ties with the EU, announced his resignation from the seven-member federal cabinet.
During a stint as Swiss president in 2017 Leuthard pushed for a normalization of ties with the EU that have been strained in recent years, including when Swiss voters in 2014 demanded quotas for EU citizens wanting to work in the country.
While defending Swiss interests, she maintained there was no alternative to good bilateral ties with the EU, which accounts for two-thirds of Switzerland’s annual trade volume.
But in this push, Leuthard, a 55-year-old lawyer, faced setbacks. During her presidency, the EU baulked at recognizing Swiss stock exchange equivalency beyond the end of 2018, ratcheting up pressure on Switzerland to strike a new trade deal.
Under the compromise-minded Swiss system, the seven cabinet members take turns to serve as national president.
Discussion has begun over whether Leuthard and Schneider-Ammann and Leuthard should be succeeded by women to help balance the cabinet. With Leuthard, there are currently two women and five men. Replacements will likely be chosen in December.