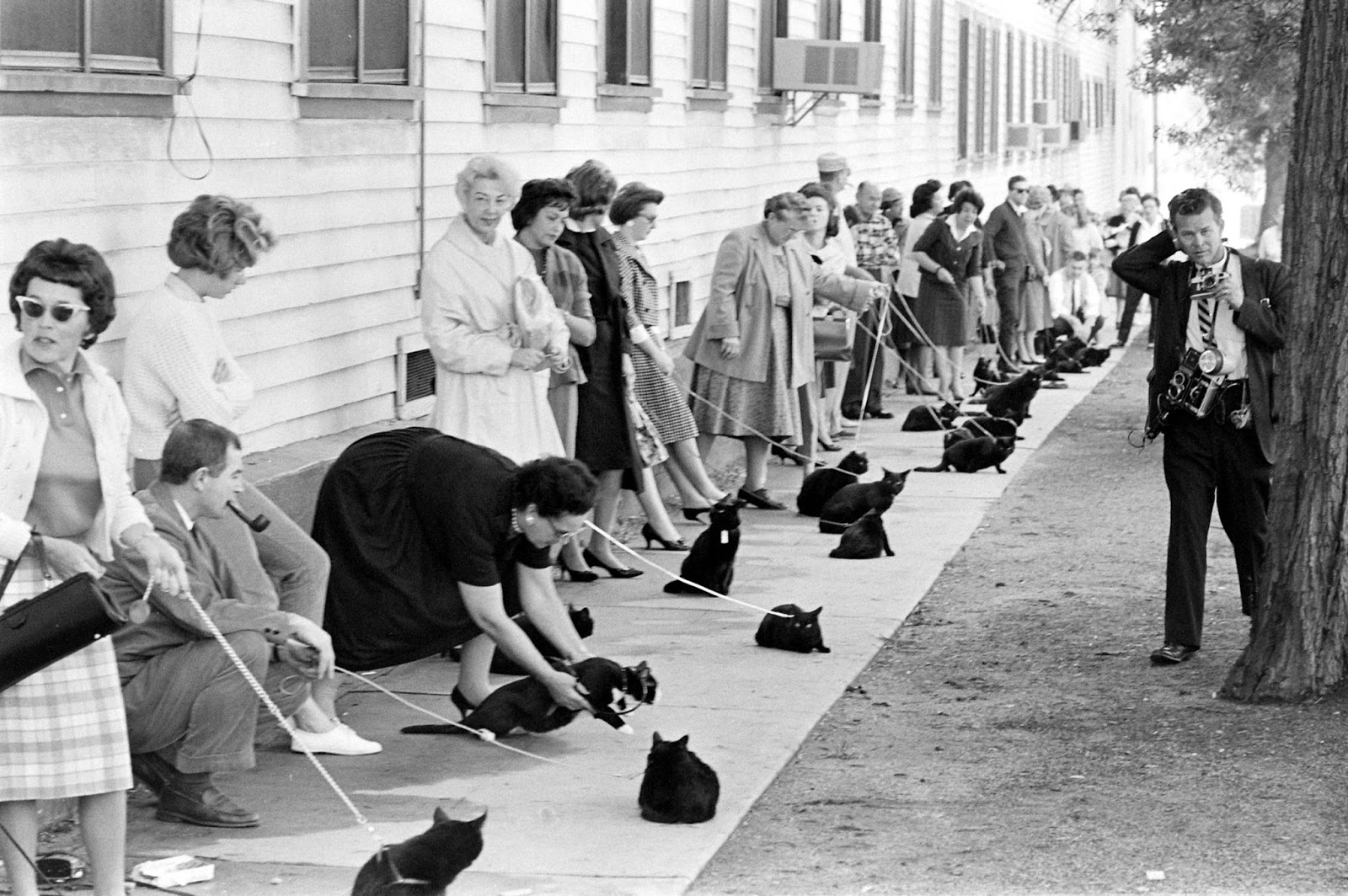 These photos were taken by legendary LIFE photographer Ralph Crane in 1961 and document the audition for a black cat role.
Following a newspaper casting call, 152 black cats are waiting for the audition for a low-budget horror movie adaptation of ‘Tales of Terror’ by Edgar Allan Poe. Those with white noses or paws are immediately disqualified.
“Tales of Terror,” an adaptation of three short stories by Edgar Allan Poe, starred Vincent Price, Peter Lorre, and Basil Rathbone, and was directed Roger Corman.
In the film Montresor Herringbone hates his wife Annabelle and her black cat. One night on a ramble about town, he happens upon a wine tasting event and challenges the world’s foremost wine taster, Fortunato Luchresi to a contest. Herringbone becomes drunk. Luchresi escorts him home and meets his wife.
Luchresi and Annabelle become physically intimate, and upon discovering this, Herringbone interred them behind a wall, alive, in the cellar of the house. Later, police investigate — and after hearing a terrifying meow-ing from the cellar, break down the wall to find Luchresi and Annabelle dead, and the cat.
Many cats showed up for the audition, all of them “considerably less nervous than their owners.” An article in Nov. 28, 1961, Los Angeles Times reported:
The sidewalk in the 600 block of N. Bronson Ave. in Hollywood turned into a cat walk Monday. More than 100 black cats lined up–as much as cats will line up–for an audition for a movie part in response to a newspaper ad seeking “a sagacious black cat.”
There were big black cats, little black cats, gray black cats, black kittens, black and white cats, white and black cats, nervous black cats, gentle black cats. There was even a white cat. It was there to keep a pal, a black cat, company. One woman needed first aid after a cat next to her decided he didn’t like her leg and scratched it. …
The producer-director – Roger Corman – was looking for a sagacious black cat to star in “The Black Cat,” part of a trilogy called “Tales of Terror” based on Edgar Allan Poe and being filmed at Producers’ Studio, 650 N. Bronson Ave. The movie’s stars — Joyce Jameson, Vincent Price, and Peter Lorre — played with each cat. To see if it was sagacious enough, someone said. Which cat won the part is supposed to be announced today.
Turns out, the lead role had already been filled by a professionally trained black cat. However, additional cats were still required as understudies and for publicity; seven were chosen based on how “mean” the look in their eyes was.
Throughout history, black cats have been afflicted with superstitious beliefs and folklore. The Medieval Period also saw hysteria and fear of the use of sorcery. Many innocent women (and men) were accused of using magic and were persecuted.