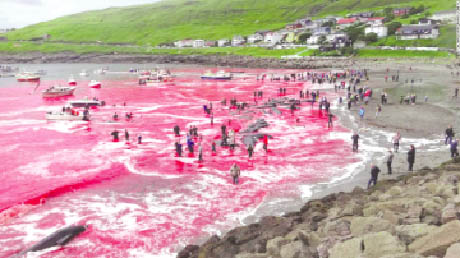 CNN: Images of a whale hunt in the Faroe Islands 200 miles north of Scotland have sparked renewed anger from conservationists and animal activists.
The pictures show dozens of whales being herded into a bay where they are killed, the sea turning red with their blood.
The hunt took place in the bay of Sandavágur on the western island of Vágar on July 30 and involved pilot whales, according to the government of the Faroe Islands. It was one of several legal hunts that take place every summer in the archipelago. It was documented by Alastair Ward, who said he was visiting to celebrate his graduation from the University of Cambridge in the UK.
Reacting to the images on Twitter, the Blue Planet Society, a UK-based pressure group, condemned the killings, describing the Faroe Islands as an “archaic country” that needs to “join the 21st century.”
“These people have no respect, no empathy, and no need,” they wrote. “This is entertainment for them.”
In a statement to CNN on Friday, the Faroese government described whaling as a “natural part of Faroese life” and rejected accusations that the killings were ritualistic or frivolous. “The meat and blubber of pilot whales have long been — and continue to be — a valued part of the national diet in the Faroe Islands,” the statement said. “Catches are shared largely without the exchange of money among the participants in a whale drive and the local community. Each whale provides the communities with several hundred kilos of meat and blubber — meat that otherwise had to be imported from abroad.”
According to Faroese regulations, the whales must be killed as quickly and with as little suffering as possible, and those doing the killing must have completed a whaling course and obtained a license.
Hundreds of whales are killed in “drives” every year in the islands, which belong to Denmark but are an autonomous country and are not bound by the laws of Denmark or the European Union. They are home to around 50,000 people, according to government statistics. The hunts have taken place around the islands for centuries. They are closely regulated by the Faroese government and international bodies, including the North Atlantic Marine Mammal Commission (NAMMC).
Pilot whales are not endangered, and current levels of killings in the Faroe Islands do not threaten their sustainability, according to a NAMMC study in 2012.