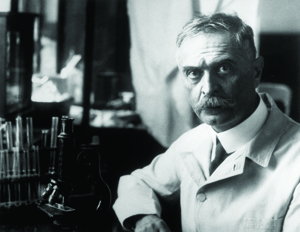 Born in Vienna, Austria on June 14, 1868, Karl Landsteiner saved the humanity by introducing the modern concept of blood groups, which on later part served as a mean of blood donation concept. Landsteiner was a medical science graduate of University of Vienna in 1891. Before the invention of blood groups people often died from ulcers, accidents, childbirth, and many other unknown blood related factors. The noble piece of work led him to The Nobel Prize in Physiology or Medicine 1930.
Landsteiner was a soul that recaptured the life of humanity. The need for blood when people used to donate blood was completely based on assumptions. They didn’t know that human bloods are characteristically and genetically separable. As a result due to the reason of false blood implantations, the patients died from different series of diseases based on RH-factors. Donation of the wrong kind of blood causes serious and fatal diseases which can even have a death case of 95%. If any accidents occurred before, this might lead the person to bleed immensely, and then death was unavoidable. But with the modern concept of Karl’s 1901 blood group, where he found out that his blood isn’t the same like any other, the doctors no more continued blood transfusions on hypothesis.