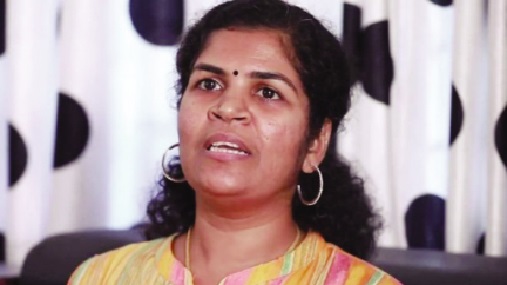 BBC: An Indian woman who defied a historic ban to enter a prominent temple in the southern state of Kerala has been abandoned by her family, officials say.
Kanakadurga, 39, had been in hospital since 15 January after she was allegedly beaten by her mother-in-law for entering the Sabarimala shrine. The Hindu temple has traditionally been closed to women of “menstruating age” – defined as between 10 and 50. India’s top court overturned the ban in September, sparking massive protests. Many women  tried to enter the temple after the court ruling, but were stopped by angry mobs of protesters. Ms Kanakadurga entered the shrine along with another woman, Bindu Ammini, on 2 January.
Thankachan Vithayatil, a social worker, told BBC Hindi’s Imran Qureshi that when Ms Kanakadurga came home on Monday evening from the hospital, she had found the door locked. No-one was home, including her husband and two sons.
“She was accompanied by the police and they took her to a government home for women,” Mr Vithayatil added.
After staying the night there, Ms Kanakadurga went to the police station, where her husband, Krishnan Unni, had been called in for questioning.
“He was not willing to take her home, while she kept insisting that she would go wherever he went,” superintendent Prateesh Kumar, told BBC Hindi.
He added that Mr Unni eventually left without her and she returned to the women’s home.
Police said the matter will now be decided in court as Ms Kanakadurga had earlier registered a case of domestic violence against her mother-in-law.
“She will petition the court for permission to enter her house. She is very upset,” Mr Thankachan said.
Ms Kanakadurga and Ms Ammini were forced into hiding and had to keep moving locations under police protection as news of their entry sparked violent protests across the state.
Ms Ammini, a professor at a law college, went back to teaching when she came out of hiding. “My students and colleagues have been very cooperative,” she told BBC Hindi in an earlier interview. She said her family also supported her decision to enter the temple.