Rouhani wants interaction with world, says Iran not a threat 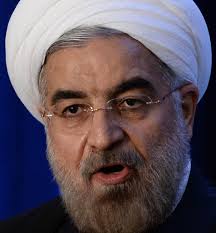 President Hassan Rouhani said on Thursday that Iran posed no threat to any other nation and that it wanted interaction with the rest of the world according to reports from Reuters. These comments differentiate from the views of the country’s supreme leader.
Iran’s ultimate authority, Ayatollah Ali Khamenei, ruled out any further reconciliation with the United States since the consummation of a deal on Iran’s disputed nuclear activity.
A standoff between Rouhani’s government, which saw the deal through, and Khamenei’s allies who opposed it, has intensified in the past few months.
According to further reports Rouhani, a relative moderate, said, “We are in favor of a policy of moderation … Iran is not a threat to any country … Tehran wants interaction with the world, with its neighboring countries.”
“With moderation we can reach our goals faster … Trusting or distrusting others cannot be 100 percent … To progress, we need to have interaction with the world,” Rouhani further stated.
Rouhani’s rivals, mainly the powerful Shi’ite clergy and security services including the Revolutionary Guards, oppose the idea of normalizing ties with the West and any political liberalization at home.