Ronaldo: Madrid could be 1st if everyone was at his level 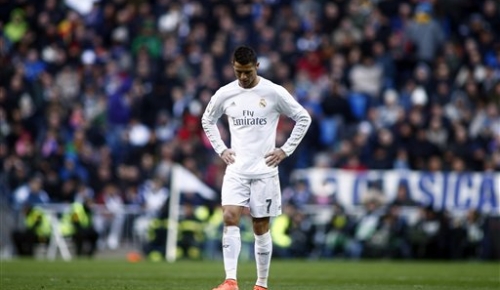 Cristiano Ronaldo says Real Madrid could be leading the Spanish league if everyone on the team was at his level.

After a 1-0 home loss to rival Atletico Madrid on Saturday virtually ended the team’s chances of winning the title, Ronaldo criticized Spanish media for blaming him for the team’s poor performances and said that things could be different if others players were playing like him.

“It bothers me when it’s said that Madrid is struggling because Cristiano is struggling. It feels like you are after me,” Ronaldo said. “If everyone was at my level, perhaps we would be in first place.”

The Portuguese striker later tried to downplay his comments, telling local media he was referring to his “physical level.”

“I’m not better than anyone,” he said. “I was talking about the physical level, about the injuries.”

Speaking calmly in a rare appearance in front of reporters after the game at Santiago Bernabeu Stadium, Ronaldo clearly expressed his dissatisfaction with how he’s being treated by Spanish media.

“A lot of times you are unfair, you ask me (tough) questions and you question my value,” he said, using a few expletives. “It’s always been like this in Spain, all these years. By your point of view, it looks like I’m playing like (expletive). And in reality, the numbers don’t lie, statistics never lie. Just look at the statistics, it’s easy.”

Ronaldo had nine goals in the team’s previous seven matches entering Saturday’s derby, including seven in his last three games at the Bernabeu. He squandered a few good chances on Saturday, though, and last week missed a decisive penalty kick in the 1-1 league result at Malaga.

Ronaldo said the absence of injured starters was what was keeping Real Madrid from contending in the Spanish league.

“Unfortunately we are without our best players. That makes things more difficult,” Ronaldo said. “I’m not depreciating the other players, but if a team doesn’t play with its best players, it’s hard to win a long competition like this one.”

Real Madrid has been without Gareth Bale and Pepe because of injuries, and on Saturday coach Zinedine Zidane also could not count on left back Marcelo. Striker Karim Benzema returned to the squad after missing a game because of a back problem, but had to be substituted at halftime.

“I like when I’m playing with these players,” Ronaldo said. “And when they are not playing, it makes everything more difficult.”

After 26 rounds, Real Madrid is four points behind Atletico Madrid and nine points behind leader Barcelona, which hosts Sevilla on Sunday with a chance to tie Real Madrid’s record of 34 unbeaten games in all competitions set in 1988-89.

“We will keep fighting, but we have more hopes in the Champions League,” Ronaldo said. “It’s a competition we start from scratch like everyone else. But, like I said, if you don’t have the best players, you are not going to win it.”