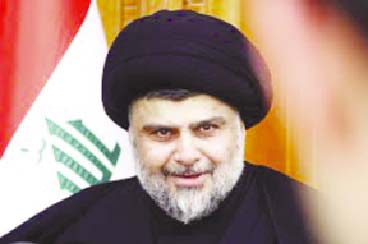 Arab News: Populist Shiite cleric Moqtada Al-Sadr retained his lead in Iraq’s May parliamentary election, results of a nationwide recount of votes showed on Friday, positioning him to play a central role in forming the country’s next government.
Iraq’s Independent High Election Commission (IHEC) released the results of the recount on its website early on Friday. Parliament ordered the recount in June after widespread allegations of fraud cast doubt on the integrity of the ballot.
The IHEC said the results of the recount matched the initial results from 13 of Iraq’s 18 provinces.
The winning parties are still embroiled in negotiations over forming the next governing coalition three months after the vote, with no sign of an imminent conclusion.
The recount did not alter the initial results significantly, with Sadr keeping his tally of 54 seats.
A group of Iran-backed Shiite militia leaders remained second behind Sadr’s bloc but gained an extra seat that pushed them to 48, with incumbent Prime Minister Haider Al-Abadi’s bloc still in third place with 42 seats.
Abadi, who is seeking a second term in office, is heading a fragile caretaker government until a new one is formed.
The political uncertainty over the makeup of the new government has raised tensions at a time when public impatience is growing over poor basic services, unemployment and the slow pace of rebuilding after a three-year war with the Islamic State militant group.
Anger is mounting with frequent protests, backed by Iraq’s top Shiite cleric Grand Ayatollah Ali Al-Sistani, taking place in the Shiite southern provinces.
Sadr, who also backs the protests, has issued a list of 40 conditions he says the new prime minister has to meet, including being politically independent and not running for re-election, for his bloc to join a governing coalition and that he would go into opposition if the conditions were not met.