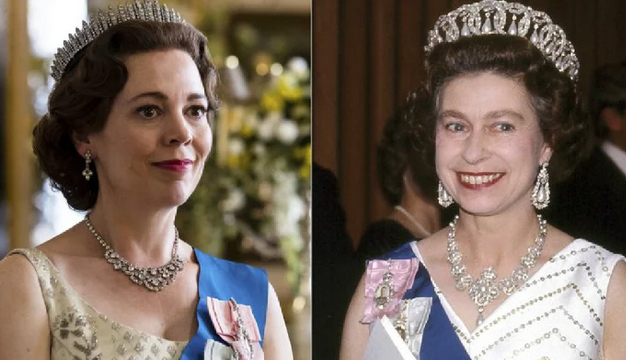 Geo.tv: [2] The Crown, one of Netflix’s most-watched originals, is drawing flak once more for portraying Queen Elizabeth II ‘unfairly.’
[3] As per reports, the series by the streaming giant has irked the British royal family and the public as it portrays the monarch as “out of depth” in several instances. [4] Rowan Dean, Sky News host came to the defense of Her Majesty for portraying her in a negative light: “We watch shows like The Crown, and there have been movies and so on made about the Queen and the Royal Family. They tend to portray her as not very bright, out of her depth in ways which are clearly laughable, particularly The Crown’s current portrayals by Olivia Colman.” [5] Rita Panahi, co-host on the show, also gave a nod of agreement to the statement, saying: “She’s obviously an intelligent woman. You cannot be lucky enough to do what she’s done just based on your mind and those around you.”

“The world leaders who have met her, brilliant minds who have had the privilege to spend time with her, I haven’t heard any of them question her intelligence. Some of those representations that might be there in pop culture are pretty unfair,” she added.

Writer for the Netflix show, Peter Morgan had found himself ensnared in controversy back in 2017 when he depicted Queen Elizabeth as a “countryside woman of limited intelligence.”

According to him, she would have preferred “looking after her dogs and breeding horses” instead of taking over the throne.

However, Olivia Colman who essays the role of the crowned head said she fell in love with her strong personality even more while playing the part in the third and fourth seasons.

“I think I was doing an impression of Claire for the first couple of weeks’ filming, definitely channelling her, but then I just started to do what the script says and I’ve fallen in love with the Queen. She’s changed my views on everything,” she said.

“She’s the breadwinner. She’s the one on our coins and banknotes. Prince Philip has to walk behind her.”

“She fixed cars in the second world war. She insisted on driving a king who came from a country where women weren’t allowed to drive. She’s no shrinking violet,” she added.