Putin, Erdogan to discuss Syria amid Russia-Turkey discord over Idlib 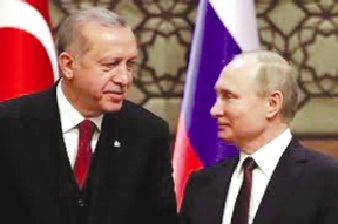 Arafat Hasan: Russian President Vladimir Putin is scheduled to meet with his Turkish counterpart Recep Tayyip Erdogan in Russia’s Sochi today in order to discuss Syrian issues, according to a statement by the Kremlin yesterday. The meeting will take place at a time when the Syrian government forces backed by Russia and Iran are preparing an offensive against the last major stronghold of the anti-government forces in the Idlib province, although Turkey and the United States have repeatedly warned against any operation.

Erdogan’s call for a cease-fire in Idlib, which borders on Turkey, was accepted neither by Russia nor Iran at the tripartite summit in Tehran on September 7.

Analysts claim that the meeting is nothing but a continuation of the Tehran summit.

The Sochi meeting is expected to focus on the Idlib issue, especially on how to attack the terrorist organization Jabhat Fateh al-Sham and on such new problems as Turkey frequently sending troops into Syria.

Russia has recently accused western countries of attempting to attack the Syrian government in the pretext of chemical attack while the West accused Russia and Syria of inducing possible humanitarian disaster, saying that they will not sit idly by without doing anything.