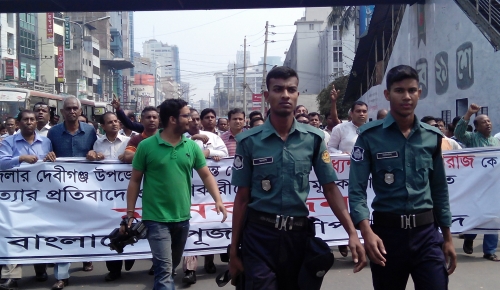 Bangladesh Puja Udjapan Parishad staged a demonstration in front of Jatiya Press Club here on Saturday demanding exemplary punishment for the killing of Hindu priest in Debiganj upazila of Panchagarh.

The demonstrators under the banner of Bangladesh Puja Udjapan Parishad brought out a procession from in front of the press club around 12 pm.

While talking to the reporters, Advocate Tapash Kumar Pal, joint secretary of the Bangladesh Puja Udjapon Parishad, said “We’ve come to know that law enforcers have already arrested six people on suspicion of their involvement in the killing. We demand exemplary punishment of those involved in the killing through fair investigation.”

They hacked him indiscriminately, chased him into a house behind the temple and slit his throat there, leaving him dead on the spot.

Six people have been arrested so far in connection with the killing.