Price hike of all essential commodities 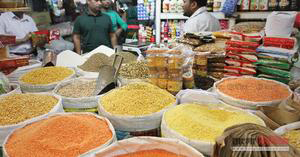 “But the supply has not increased against the demand. That’s why, the price has shot up,” he said.