PM Hasina dedicates Padma Bridge to the people of Bangladesh “You gave us courage, you gave us power” 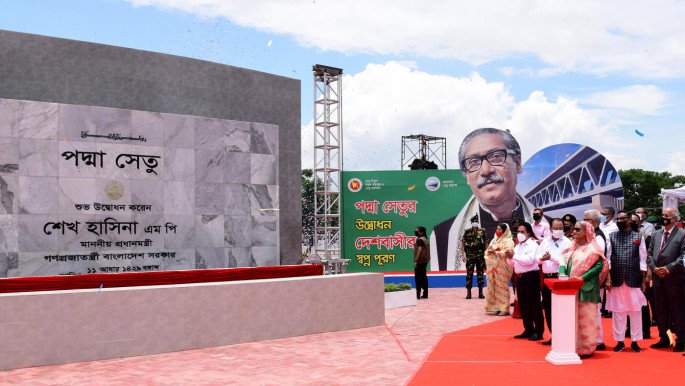 UNB, BSS: Prime Minister Sheikh Hasina yesterday declared that Padma Bridge is not just a concrete infrastructure of brick, cement, steel and iron, rather this is a symbol of the nation’s pride, honour, and ability.
“The bridge belongs to the people of Bangladesh. It showcases our passion, our creativity, our courage, our endurance, and our perseverance,” she said. The premier was addressing the grand opening ceremony of the country’s largest bridge – Padma Bridge over the mighty Padma River at Mawa end.
She said the much-cherished bridge stands on the turbulent Padma River overcoming many obstacles and breaking the web of conspiracy. “Today, I am happy, proud, and overwhelmed along with millions of people of the country,” said Hasina.
Mentioning that the quality of the Padma Bridge construction work has not been compromised, she said: “This bridge is built with the latest technology and materials in the world maintaining full transparency. The whole construction process has been completed while maintaining the highest standards.”
Prime Minister Sheikh Hasina said that the foundation of the Padma Bridge is still the deepest in the world.
In this connection, she said that the piles of this bridge have been laid up to a maximum depth of 122 metres while sophisticated technology has been used for earthquake prevention. “Because of some of the more special features, the construction of this bridge will be included in engineering textbooks around the world – that’s for sure,” she said. The prime minister said the engineers of Bangladesh have gained experience in implementing big projects from this huge work. “In the future, we will be able to build such complex bridges or infrastructure ourselves,” she further said.
Lauding people for their support during the construction of Padma Bridge, PM today said, “You gave us the courage, you gave us the power… I’m ready to sacrifice myself for you. If needed, I will sacrifice my life.”
She then shouted the slogan “Joy Bangla! Joy Bangabandhu!”, as thousands of people joined her. PM was speaking at the rally organised by Awami League in Madaripur’s Shibchar. Many naysayers thought it will not be possible to construct the Padma Bridge with Bangladesh’s own funds. “The power of the people always prevails. I believe in people’s power.” Earlier, the Prime Minister reached the venue at Kathalbari Ferry Ghat in Madaripur on the occasion of inaugurating the Padma Bridge.
Before arriving at the rally venue, several helicopters showered colourful confetti from the sky at the venue as people burst into joy.