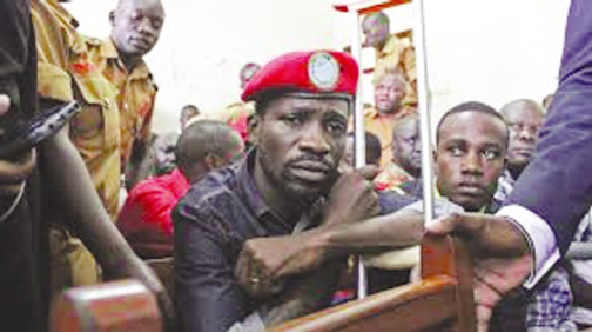 The Guardian, UK: Bobi Wine, the Ugandan pop star turned opposition politician whose beating by soldiers last month prompted mass protests, has said he will return home on Thursday to prove that the “power of the people is greater than the people in power”.
Wine, whose real name is Robert Kyagulanyi Ssentamu, will fly from the US, where he has received medical treatment.
“If I think about the dangers that face me, it is crazy to go back. But I want to be home. There are 40 million people who need hope so I will go and meet them no matter what,” Wine told the Guardian.
The return of Wine will rattle authorities in Uganda.
The former reggae singer, who was elected to parliament last year, has emerged as a powerful voice with his calls for young people in the east African country to stand up and take over from a “failed leadership”.
Wine was detained after the motorcade of Uganda’s president, Yoweri Museveni, was stoned in Arua, a northern town, during campaigning for byelections last month.
The 36-year-old was badly beaten, kept in a military barracks without proper medical attention and then produced in court to face treason charges. His driver was shot dead.
Wine called on his supporters to “protest, vote and reach out” but remain within the bounds of the law.
“My message to [my supporters] is that this is not about Bobi Wine, it is about everybody,” Wine said. “Protest, voting, reaching out are all constitutional. Mr Museveni should understand that there is nothing as powerful as an idea whose time has come … 80% of Ugandans have never known another leader. The writing is on the wall.”
Uganda’s population is one of the youngest in the world, with more than two-thirds under 24.
On his Twitter feed, Wine says he is “one ghetto child who has something to say through music”. Many of his songs deal with social and political issues, calling for ordinary young people to act to improve their lives and their country.
Authorities in Uganda have denied the assault allegations and accused Wine of being funded by overseas organisations. He said such charges were an “insult”.
More than 80 artists, activists and politicians signed a statementcondemning the assault on Wine. Signatories included Chris Martin, Chrissie Hynde, Brian Eno and Damon Albarn as well as African musicians such as Femi Kuti.
There were also protests in other countries in Africa, the UK and the US.
“I was overwhelmed by the support, most of all when I was incarcerated and incommunicado. I was humbled by the … Ugandan people and the enormous support from around the world. Now we know we are no longer a cry from the dark,” Wine said.
Analysts say it is likely the authorities in Uganda did not expect him to return when they allowed him to fly to the US.
Museveni, who took power in 1986 and is a key US security ally, has become increasingly authoritarian in recent years. The 74-year-old president is able to seek re-election in 2021 because parliament passed legislation last year removing a clause in the constitution that had prevented anyone over 75 from holding the presidency.
Demonstrations following Wine’s detention were repressed by riot police and other security forces. Three people died and around 100 were arrested.
Wine called on the international community to “stand up for the standards they preach”.
“They have been partners in crime with the regime in Uganda for so long … They must know that injustice anywhere is a threat to justice everywhere,” Wine said.
The US, EU and UK have been critical of the treatment of Wine, a sign that long-standing support may be ebbing as observers worry about growing instability.
It is unclear how authorities will react if, as expected, thousands throng Entebbe airport on Thursday.
Next month Wine is due to face trial for treason. A guilty verdict could result in a death penalty. His medical condition has improved, though he still needs a stick to walk.
“Honestly I am afraid. My family is frightened. My wife is frightened. My people are frightened. They have done terrible things to me and I know they still can,” he said.
Wine has compared himself to France’s Emmanuel Macron and made no secret of his presidential ambitions. However, the singer is controversial and has faced repeated accusations of homophobia.
Experts have long predicted political tensions in Uganda
“Popular discontent is growing over President Museveni’s apparent desire to remain in power while governance, economic performance and security deteriorate. Uganda is not in danger of renewed civil war or rebel violence, but it risks sliding into a political crisis that could eventually threaten the country’s hard-won stability,” the International Crisis Group warned last year.